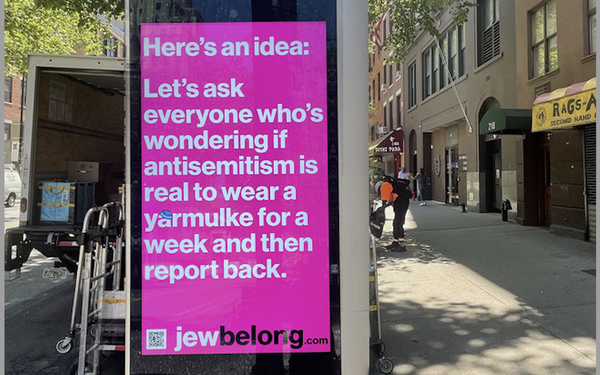 JewBelong, a nonprofit founded by two veteran brand marketers to educate and inspire people about Judaism, has launched an outdoor and social ad campaign to combat a rising tide of U.S. anti-Semitism.

Starting in New York City with a budget of $110,000, JewBelong co-founders Archie Gottesman and Stacy Stuart plan to expand the campaign to Los Angeles, Chicago, Philadelphia and other cities in the coming weeks, to the tune of a half-million dollars.

Citing a recent “tsunami of hate,” Gottesman told Marketing Daily that anti-Semitism needs to be “everybody’s problem,” akin to Black Lives Matter and the movement against anti-Asian hate.

“We’re meeting the moment,” she continued, adding that the Jewish community itself must “think about anti-Semitism, not the next challah recipe.”

The first wave of JewBelong’s humorous ads, “compelling and catchy” in Gottesman’s words, have been bought through July on 800 Manhattan and Brooklyn LinkNYC outdoor digital kiosks, as well as print posters in PATH train stations (for which the nonprofit is carefully monitoring to track possible defacements).

Three different versions of the messaging are now running, with more to come.

One reads: “Here’s an idea: Let’s ask everyone who’s wondering if antisemitism is real to wear a yarmulke for a week and then report back.”

That one hits particularly hard for Gottesman, who cited stories of how some observant Jews, who are supposed to wear the head coverings at all time, have been removing them at times in the wake of recent anti-Semitic incidents.

The other two ads read “I promise to love being Jewish 10x more than anyone hates me for it” and “Being woke and antisemitic is like being a vegan who eats veal.”

If this style seems familiar to New Yorkers, it might be because of previous JewBelong ads like “Even if you think kugel is an exercise for your vagina…” or perhaps two decades worth of the Gottesman/Stuart duo’s ads for Manhattan Mini Storage, such as “If you don’t like  gay marriage, don’t get gay married,” "NYC: Tolerant of Your Beliefs. Judgmental About Your Shoes" and “Why leave a city that has six professional sports teams, and also the Mets.”

Unlike JewBelong’s previous ads, which were aimed mainly at reminding secular Jews to remember their religion, the latest campaign aims to reach everyone, with a particular emphasis on young adults.

Gottesman noted that the current “Jewish community is not used to anti-Semitism.” While older Jews are at least cognizant of the Holocaust and past American anti-Semitism (even if not affected by it themselves), she said  the “next generation” is now being caught completely unawares when they receive anti-Semitic messaging  from friends.

The ads, as Gottesman and Stuart did with Manhattan Mini Storage, are being generated in-house, with the former spearheading the creative and the latter the media buying. (The Bender Group is AOR for strategy and creative).

In addition to expanding across the country, Gottesman also hopes to put up an electronic billboard in New York’s Times Square. “It would be so powerful,” she said, anticipating people taking photos and spreading the message on Instagram and social media so that it can go viral just as so much hate speech does.

Even before a reported increase of 75% in anti-Semitic incidents during the two weeks of recent fighting between Israel and Hamas, the Anti-Defamation League had declared 2020 as the year of the third-highest annual volume of assaults, harassment, and vandalism toward American Jews since it began tracking such data in 1979.