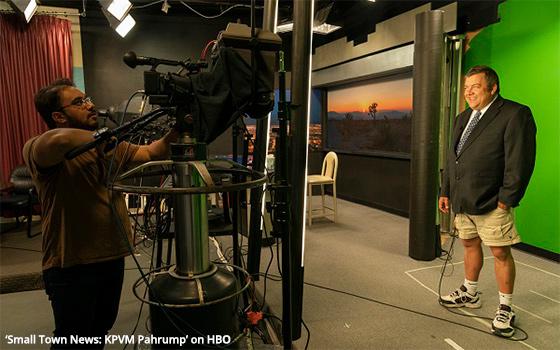 The goal of making something interesting -- such as a TV show -- out of the goings-on at a small-market TV station can present a challenge because, at first glance, not much goes on inside these homey premises.

Despite that glaring difficulty, the task was taken up last year by prolific producers Fenton Bailey and Randy Barbato, whose company, World of Wonder Productions, has produced a new, six-part docuseries about just such a TV station.

The show is a workplace docuseries about this independent station (i.e., not affiliated with any network) -- KPVM/Ch. 41 -- broadcasting from Pahrump, Nevada, a town located 62 miles west of Las Vegas with an estimated population of 37,298 residents, according to the U.S. Census Bureau.

Pahrump is located in one of the Nevada counties -- in this case, Nye County -- in which legal brothels are allowed to operate. The area’s most famous current resident is probably Heidi Fleiss, the one-time Hollywood Madam who lives either in Pahrump or an adjacent part of the county called Crystal, where she shares a house with a gaggle of exotic birds.

The story of Heidi and her birds was told in a documentary that was seen on HBO in 2008. Titled “Heidi Fleiss: The Would-Be Madam of Crystal,” the documentary was also made by Fenton and Bailey, whose company has produced hundreds of TV shows, mostly reality shows and documentaries.

“Small Town News” represents a return to Pahrump for them, although their past history in the area is not mentioned. And except for one fleeting glimpse in the show, neither is Heidi Fleiss.

The show is not about her or the town’s famous brothels (including the one called the Chicken Ranch). Instead, the show’s principal plot line concerns the station owner’s ambition to boost his station’s signal strength so it can reach Las Vegas, which ranks 39th on the list of TV DMAs.

Pahrump is considered part of the Las Vegas television market, and the Vegas stations all reach Pahrump. But this Pahrump station does not reach Las Vegas -- at least not yet.

The station’s owner, Vernon Van Winkle, built it from the ground up 23 years ago. He comes across as a reasonably optimistic individual, but at the same time, the station is barely breaking even.

In addition, like many small-market TV stations, KPVM struggles to keep staff members, only a few of whom seem to stick around for any appreciable time. All told, the station seems to have about 10 employees, give or take (including weatherman John Kohler, pictured above).

For me, and possibly for others who either work in the local television business or at least follow it, this docuseries about a small-market station comes as a welcome surprise since the travails of local TV do not come up for docuseries treatment all that often (to say the least).

However, for others with little or no interest in how local TV stations in small towns make money, boost their signals or produce news on a shoestring with a tiny staff, it is hard to envision this show drawing an audience much bigger than the viewership for KPVM itself.