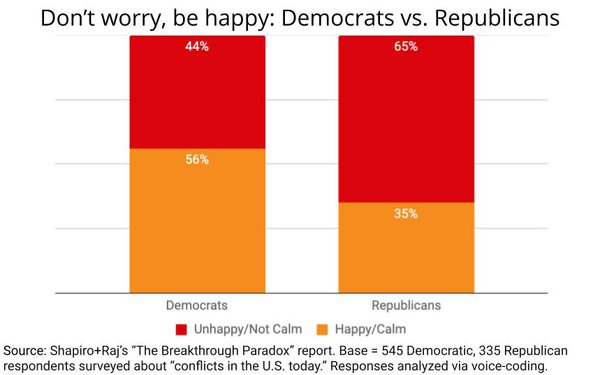 An abundant body of research has shown that when it comes to the state of America, Democrats are from Mars and Republicans are from Venus, but some new research suggests a better metaphor might be whether they view America's glass as being half full or half empty.

The research, conducted by strategic research and insights consultancy Shapiro+Raj, surveyed 1,300 Americans to understand their perceptions -- and emotions -- about the major conflicts in the U.S. today. The findings are summarized in a new report dubbed "The Breakthrough Paradox," which segments Americans in a variety of ways, including their political affiliation.

The study also utilized some sophisticated linguistics analytics, as well as voice coding, to understand how respondents felt about how they responded and when their voice codes were analyzed, more than half (56%) of Democrats were deemed "happy" or "calm," compared to only about a third of Republicans (35%).

"Individuals who identified as Democrats were relatively happier or calmer as they answered the conflict question compared to those identifying as Republicans," the report finds, adding,"Republican responses were coded as more anxious or sad. This likely signals that Democrats have a higher level of hope and optimism than Republicans."

Specifically, the analysts say Democrats are more optimistic that one of America's chief conflicts -- the tension between "individual freedom" vs. "collective benefits" can be "effectively addressed."

I imagine there are other extenuating factors influencing the emotional sentiment of Democrats vs. Republicans responding to the study, including the fact that Democrats are now the party mostly in power, and maybe also some cognitive dissonance among Republicans realizing they were sold a fake bill of goods by some members of their party.

In fact, the study also finds that Republicans are far more cynical that the U.S. government is "best suited" to resolve the conflict (32% of Republicans vs. 38% of Democrats answered that way).

The report goes much deeper into the mindsets of Americans overall -- not just in terms of their party affiliations, but in terms of generational divides, as well as the "haves" and "have nots" (those identifying as being "critically concerned" vs. those who are "unconcerned" about conflict resolution for a variety of personal needs).

The study also examines whether the "private sector" or "individuals" are better suited than government at resolving conflict, including whether brands should play an explicit role.

Not surprisingly, consumers do expect and are more likely to embrace brands that "align with and connect at the deep value level with people."

Seventy-two percent of respondents said they like it when a brand they purchase shares a similar world view, while 42% prefer it, and 7% act on it.