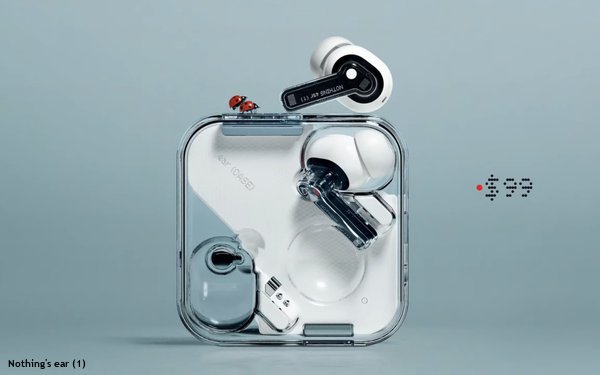 Most high-profile is the ear (1) from Nothing, a brand-new London-based company co-founded by Carl Pei, former co-founder of Chinese smartphone giant OnePlus.

Introduced via a 42-minute sponsored livestream on Unbox Therapy’s You Tube channel, ear (1) is a $99 pair of wireless earbuds. Besides a price point lower than Apple’s wireless AirPods (which start at $159), the most apparent difference from other earbuds -- the market in which Apple is the largest player -- would appear to be the product’s quite literal transparency, including a see-through case and visible magnetics.

In an early review, Gizmodo also pointed to some tech breakthroughs, including “a powerful bass-boosting 11.6-millimeter driver, which is a feature we’ve yet to see on wireless earbuds priced below $100. The same goes for active noise-canceling.”

Nothing is backed by such investors as Google Ventures, Twitch co-founder Kevin Lin, Reddit co-founder Steve Huffman, iPod inventor Tony Fadell, and prolific YouTuber Casey Neistat, founder of Beme, a user-generated app that was sold to CNN five years ago for a reported $25 million.

During the launch video, Pei noted that 300 million wireless earbuds will be sold worldwide this year, but that Nothing will not just be an audio brand. “It’s a great place to start,” he said, but “there’s a lot more coming.” The aim, he added, is a “seamless digital future when all the technology around you is so integrated it doesn’t feel like a burden anymore.”

A fully charged pair of ear (1) earbuds will provide up to 6.2 hours of listening time over a 34-hour period, said Nothing’s head of marketing Akis Evangelidis during the video, with a 10-minute recharge providing an hour of listening.

A “limited drop” of ear (1) will take place on July 31, with the product going wide on August 17. It will be sold online, along with retailers such as London department store Selfridges.

While Nothing has been busy redesigning earbuds, Stockholm-based Happy Plugs says it has reinvented headphones for kids.

Kids listening on regular headphones at high volumes can suffer noise-induced hearing loss over time, Happy Play said. Citing a recent study by the World Health Organization (WHO) showing that 19.5% of children between 12 and 19 suffer from hearing loss, Happy Plugs said that Play follows the WHO recommendations of an 85dB-limited volume range.

Priced at $79.99 in a choice of four colors -- white, black, pink and gold -- Play is available online and through retailers worldwide.