'Gawker' Is Back Almost 5 Years After Shutting Down 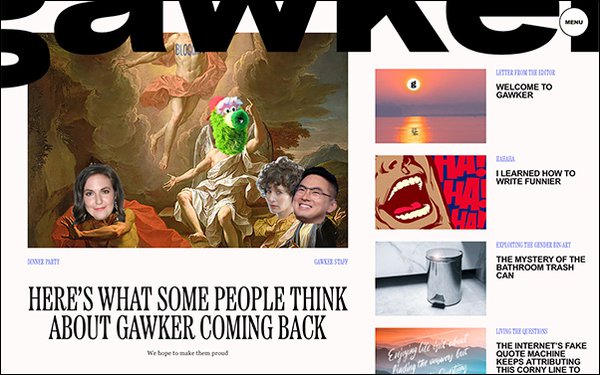 Gawker, the site known for no-holds barred journalism and a snarky attitude, is back, with Leah Finnegan as editor.

The site says: “WELCOME TO GAWKER. The new one.”

The back story is that Gawker entered bankruptcy in 2016 after losing a $140 lawsuit judgment to wrestler Hulk Hogan and billionaire Peter Thiel. Bustle Digital Group  (BDG) acquired Gawker for $1.35 million at a bankruptcy auction in 2018, and planned to revive the site back in 2019, but backed off.

Finnegan said “no way in hell” when initially approached by BDG. She had been a reporter for The New York Times, editor of BDG’s The Outline, which shut down in April 2020, and features editor at Gawker.

“Who in God’s name would want to edit a website that was cratered by an evil tech lord and sullied by a botched relaunch?” Finnegan writes in her opening editorial. “The Gawker name was toxic, but also weirdly revered; an intractable combination.

However, she reconsidered when Bustle approached her again in January. “It was a dark time. I was living off of Biden bucks, watching a lot of Love It or List It, and wondering what I would do with my life.”

Finnegan determined:“Nothing was funny anymore. There were no good sites to read.” So she took on the challenging.

Her first order of business, besides deleting all her old posts, was hiring “all my favorite writers and editors.” These include Brandy Jensen, features editor, and Jocelyn Silver, managing editor.

The redesigned site features such headlines as “Capitol Rioter Has Some Loyal Bitches,” “Adam Neumann Spotted In The Hamptons With A Pizza And A Rabbi” and “Do Justin And Hailey Bieber Hate Each Other?”

Time will tell if Finnegan’s boast holds true: “I am a genius.”