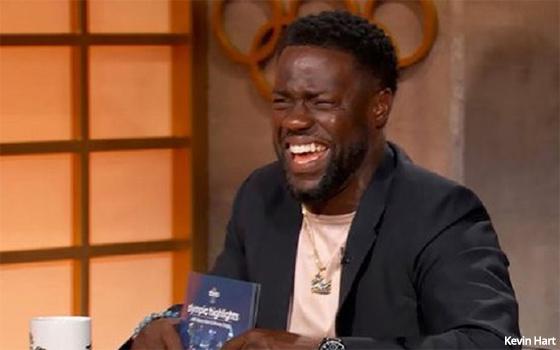 The TV critic who in May declared, sight unseen, that a planned Kevin Hart talk show coming to Peacock this year would be a “dud on arrival” should be ashamed of himself.

Oops, that was me. And truth be told, I am not ashamed. Wrong, maybe. But ashamed? Nah. My years of experience in the business of writing opinion columns about TV has conditioned me to always stand behind what I write, no matter how ludicrous it turns out to be.

Besides, I kind of liked the pun -- “dud on arrival” -- if I do say so myself. This clever play on the phrase “dead on arrival” was applied in reference to this new Kevin Hart talk show titled “Hart to Heart,” where in each episode the comedian will be seen conducting a one-on-one interview with another celebrity.

The offending phrase was part of a TV Blog published in May during Upfront Week that compared and contrasted the first-day presentations put on by NBCUniversal and then Fox (both done virtually). The short summary: Fox good, NBCU bad.

The Kevin Hart portion was part of the blog that talked about the succession of NBCU talent who came onscreen to talk about themselves, or were seen on clips from whatever show they were there to promote.

I believe the judgement behind the “dud on arrival” phrase was made based on a short burst of clips from “Hart to Heart” that seemed, at the time, to demonstrate that the show would amount to very little, if it was ever made in the first place -- which was something else I had reason to doubt.

Well, guess what? The show got made and it is pretty good. I watched the first episode in which Hart interviews Miley Cyrus, and found that I enjoyed it very much.

This may have been due more to Cyrus, 28, than Hart because she happens to be a very entertaining conversationalist. She is an outspoken, self-deprecating raconteur with a sense of humor that is very self-aware.

Credit should also go to Hart, who asked all the right questions, and then stayed out of the way of his guest’s answers. With Cyrus, this was the right strategy to adopt because she is a pleasure to listen to.

Future episodes of “Hart to Heart” will likely sink or swim depending on the conversational skills of the guests lined up for each of them.

For years, Kimmel has been outspoken in his dislike for Leno -- a disdain for the former “Tonight Show” host that goes back years. If Hart can get Leno and Kimmel to talk about each other, then their interviews will not only be interesting, but they might make news too.

“Hart to Heart” starts streaming on Thursday (August 5) on Peacock.