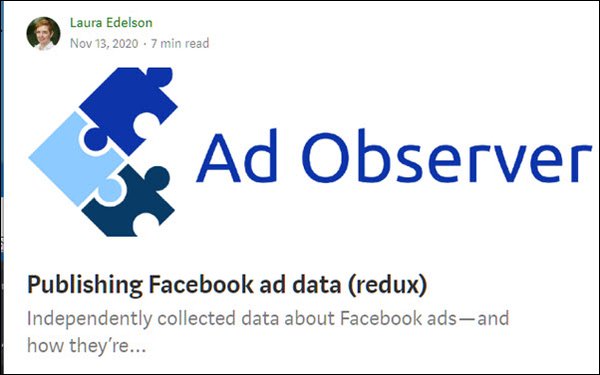 Facebook has disabled the personal accounts of researchers at New York University who have been studying political ads on the social media platform.

The researchers in NYU's Ad Observatory project created a browser extension to collect data on the political ads the website shows the thousands of people who volunteered to be part of its project.

Facebook claims the researchers are scraping data in violation of its rules — which prohibit collection of its platforms’ data using automated means, without permission — and interfering with the platform’s compliance with its July 2019 agreement with the Federal Trade Commission.

That settlement, which occurred after the revelations of misuse of Facebook-collected consumer data for the Trump campaign by Cambridge Analytica, requires independent oversight of Facebook’s practices in regard to safeguarding consumer privacy, including use of its data by outside entities. The settlement came with an unprecedented $5 billion fine.

"We think it's important to democracy to be able to check who is trying to influence the public and how,” the Ad Observatory states on its website.

“We need better transparency for Facebook political ads,” it adds. “Broadcast stations are required by law to disclose political ad buys on TV and radio to the public. No similar requirement applies to political ads on Facebook, Google, Snapchat, Hulu and other online media.”

In announcing its disabling of the researchers' accounts, Facebook asserted that it has repeatedly tried to bring the researchers’ work into compliance with its terms. That “apparently included inviting the researchers to access its U.S. 2020 Elections ad targeting data through FORT’s Researcher Platform,” notes Engadget. Facebook claims that the data set on the platform could offer more comprehensive information than what the extension can collect, but the researchers turned down the offer.

The post, by Product Management Director Mike Clark, accuses the researchers of creating a browser extension designed to evade Facebook's detection systems and scrape data such as user names, ads, links to user profiles and "Why amI seeing this ad?" information, some of which is not publicly-viewable on Facebook. "The extension also collected data about Facebook users who did not install it or consent to the collection," it adds. "The researchers had previously archived this information in a now offline, publicly-available database."

However, as Protocol points out, "The users who had data collected without their consent aren't private users: They're advertisers, whose ads are by definition already public, and whose information Facebook stores itself in an ad archive."

And while Facebook “has taken steps by voluntarily disclosing political ad content and data through its online Ad Library," the library “is complicated to use, untold numbers of political ads are missing, and a significant element is lacking: how advertisers choose which specific demographics and groups of people should see their ad — and who shouldn't,” points out the Ad Observatory’s site.

Facebook is “silencing us because our work often calls attention to problems on its platform,” Laura Edelson, a computer science Ph.D. candidate at NYU’s Tandon School of Engineering and the lead researcher on the project, said in a statement to Bloomberg. “Worst of all, Facebook is using user privacy, a core belief that we have always put first in our work, as a pretext for doing this. If this episode demonstrates anything, it’s that Facebook should not have veto power over who is allowed to study them.”

“Facebook does not want us to make this dataset available to the public,” Edelman posted on the site last November (above). “In October, Facebook sent a cease-and-desist letter to block our project. More than 50 consumer, civic technology, and journalism organizations, as well as nearly 30 individual journalism professors, researchers, and leaders signed a letter demanding Facebook withdraw the letter and work with our team and other researchers to bring more transparency to political ad data. Members of the House Energy & Commerce Committee has likewise sent Facebook a letter urging them to work with us. Facebook has not responded.”

Further, prior to the FTC settlement, in January 2019, “Facebook blocked the previous version of Ad Observer, ProPublica’s Facebook Ad Collector, using a quiet technical approach that broke the tool,” she wrote. “At NYU, we had been using the data generated by this project, finding particular value in connecting ad targeting data to the impression data made public by Facebook through the Ad Library API.”