'The Plane' Truth: New 'Fantasy Island' Is Unlike The Old One 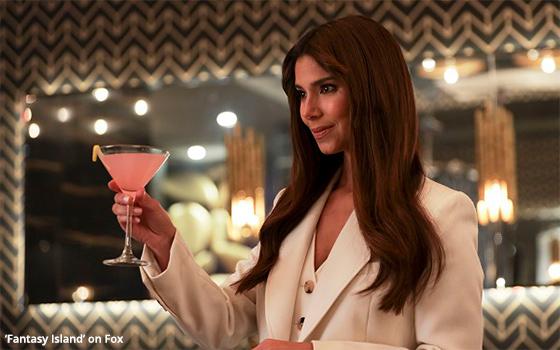 The new “Fantasy Island” premiering this week on Fox is as unlike the original series as 2021 is different from 1977, the year the original premiered on ABC.

The star of the old show was Mexican-born actor Ricardo Montalban, then 56, whose career had been resurrected by a series of TV commercials starting in 1975 for the Chrysler automobile known as the Cordoba.

Few who were alive in that era will ever forget the way Montalban caressed the car’s upholstery in the commercials and then noted in his Mexican-Spanish accent that they were made of “rich Corinthian leather” -- something none of us had ever heard of before but were persuaded by the sound of his voice that it was ultra-luxurious and something to be desired.

Clad each week in a flamboyant white suit, Montalban took the same suave approach to playing “Mr. Roarke,” the self-confident host and in-house Svengali of the original “Fantasy Island,” which aired from 1977 to 1984 and became an enormous hit for ABC and its producer, Aaron Spelling.

In the new series, the host of the mysterious island on “Fantasy Island” is a female descendant of Mr. Roarke played by Roselyn Sanchez (pictured above).

She too has a white suit and her ancestor’s uncanny talent for interpreting the desires of her guests and choreographing the unique and often life-changing fantasies that they come to her island to experience.

One thing she does not have, however, is a diminutive sidekick and aide-de-camp named Tattoo. In short, she has no Hervé Villechaize, which will come as a drawback for anyone old enough to remember the old show and will be surprised and dismayed that no one bothered to include a descendant of Tattoo in the new show.

In fact, the new “Mr. Roarke” -- Elena Roarke -- has no sidekick at all, but appears to recruit one in the premiere episode that the TV Blog previewed this week.

Interestingly, and perhaps purposely, her choice of an assistant actually has to do with a tattoo the woman has engraved on her back, but that is where any resemblance between the original Tattoo and this tattooed lady begins and ends.

The one-hour series premiere has two ongoing guest stories. In one of them, an aging couple, in which the wife is dying of cancer, come to the island for one last chance to feel young again.

In the other story, a TV anchorwoman who co-hosts a local morning show in Phoenix, Arizona, is sick and tired of the tremendous effort she has to make everyday to stay slim and otherwise stave off the aging process in order to keep her job in an industry that prizes youthful appearances.

So she comes to Fantasy Island to gorge herself on fattening foods, while not gaining any weight. This is the kind of magical (and seemingly impossible) fantasy that this place and its enigmatic Ms. Roarke are more than able to fulfill.

But fantasy-fulfillment is not all that this island’s guests get out of their visits. What each of them receives are valuable lessons about life -- lessons that usually run counter to what they were looking for in the first place.

Back in the late-’70s and early ’80s, the old “Fantasy Island” scored an average 20 rating each week (give or take), which is the kind of audience no prime-time network TV series ever gets today.

One of the features of the old show that endeared it to its audience was its reliance on an array of guest-stars drawn from the ranks of old TV shows and movies -- the same casting strategy adopted by Spelling’s other mega-hit at that time, “The Love Boat.”

In the premiere episode of the new “Fantasy Island,” this casting strategy was nowhere in evidence.

In those bygone days of 20 ratings, it seemed as if every American knew Tattoo and the joyous way he shouted “The plane! The plane!” to herald the arrival of a new planeload of “Fantasy Island” guests.

There is no such exuberance in this new “Fantasy Island,” which perhaps makes it more suited for today than yesterday.