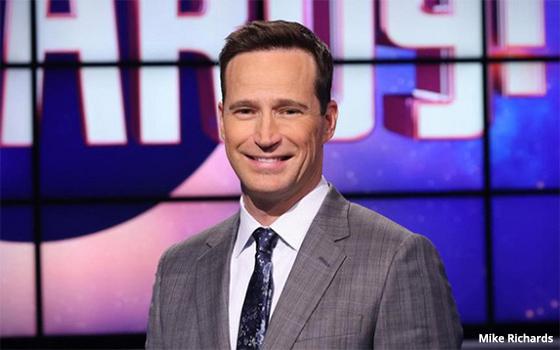 How did a guy like Mike Richards land the job of host of “Jeopardy!”? One reason could be: There are no real quiz show hosts anymore.

Putting aside for a moment the discussion about how Richards, 45 -- who also happens to be executive producer of “Jeopardy!” and its high-rated companion show, “Wheel of Fortune” -- may have leveraged his power to grab the “Jeopardy!” hosting job too, one of the issues in TV quiz- and game-show hosting today is that there is no longer a coterie of highly reliable, long-time professionals in this particular area.

In case you have not yet heard the news: Sony Pictures Television, producer of “Wheel” and “Jeopardy!” (both syndicated by the CBS syndication unit that is now called CBS Media Ventures) finally announced this week how it intends to deal with the “Jeopardy!” hosting job in the coming 2021-22 season.

For almost the entire 2020-21 season, the show featured a parade of guest-hosts -- none of whom were professional quiz-show hosts -- following the death of Alex Trebek last November.

The announcement named Richards, who was the second of those guest hosts for two weeks last winter, as the new permanent host of the syndicated, daily “Jeopardy!” show.

Along with that, Sony announced its intention to extend the “Jeopardy!” brand with new prime-time specials, starting next year with a prime-time college tournament on ABC, and other unspecified “Jeopardy!” spin-offs.

These will be hosted by Mayim Bialik, the sitcom actress (“Blossom,” “The Big Bang Theory,” “Call Me Kat”) who guest-hosted the show for two weeks in June. She is a smartie who also happens to have a Ph.D. in neuroscience.

With all due respect to her, the bigger of the two announcements here is Richards succeeding Trebek -- which immediately raised a question: Weren’t there any real quiz-show hosts available? The answer was no.

To give Richards his due, he is no game show novice, but he has been a producer, not a host. His credits include executive producer positions at “The Price Is Right” and “Let’s Make a Deal” (on CBS daytime), and the prime-time “Who Wants To Be a Millionaire?” on ABC.

IMDB.com lists one game show that he actually did host -- a 2012 version of the long-running “Pyramid” game show (this one titled simply “The Pyramid”) that ran for 40 episodes on the Game Show Network before it was canceled.

With this one short-lived hosting gig on his resumé, he somehow acquired the most coveted job in all of TV quiz shows and game shows -- the “Jeopardy!” job.

And by the way, Richards (who probably goes by “Mike” instead of “Michael” so that no one will confuse him with Michael Richards, who played Kramer on “Seinfeld”) has only been employed by Sony as executive producer of “Wheel” and “Jeopardy!” for one season.

This means that in about a year or less with the company, he managed to not only retain control of both of these high-rated, lucrative shows in that short time, but he also succeeded in securing the coveted starring role in one of them for himself.

Watch out, Pat Sajak -- it wouldn’t be too surprising if this guy maneuvers himself into the host’s position on “Wheel” too. And before you know it, he’ll also be replacing Vanna White at the show’s puzzle grid.

Sony’s press release announcing that Richards will be “Jeopardy’s” new host took pains to emphasize that the process of making this choice was something of a group effort that involved senior executives, focus groups, input from various unnamed “partners” and even viewers.

And yet, you still come away from this news with the feeling that the boss of the show in some way or another named himself to the best job on the show.

Or to put it another way, he (and possibly all of these others too) deemed himself to be the most qualified out of all of the other candidates (if any) who applied for the job.

But that’s the thing: Game show and quiz show hosts of the sort many of us grew up with are no longer around. The well-groomed, perfectly coiffed and manicured hosts of old -- who went from show to show throughout the 1960s and ’70s -- are gone now.

It was a profession unto itself. Alex Trebek himself had roamed widely in the game-show universe, hosting more than 10 shows before he took up the job on “Jeopardy!” in 1984.

And so it goes -- a world of professional TV game-show hosts and announcers has shrunk to the point that it is almost gone.

The result is that game shows now are being hosted by the likes of Alec Baldwin (ABC’s “Match Game”), and the executive producer of “Jeopardy!” angles for the host job himself because, among other reasons, there really is no one around today who could adequately fill the shoes of the man he is succeeding, Alex Trebek.