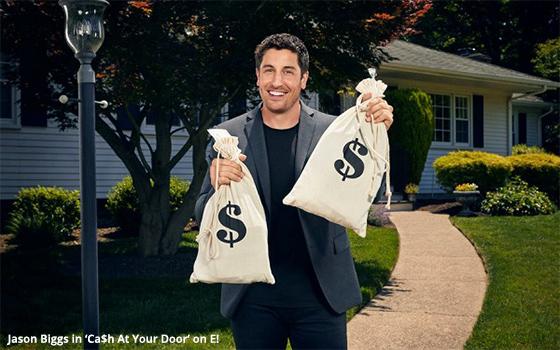 Currently seen occasionally on Bravo, the free-wheeling (and on-wheels) quiz show “Cash Cab” has been around since 2005.

But until now, its winning format had never been adapted for another quiz show. This has finally happened, and the result is this new door-to-door quiz show premiering on E! Tuesday night called “Jason Biggs’ Cash At Your Door.”

And here is the good news: This new housebound version of the quiz-show-in-a-cab format is just as light-hearted and entertaining as the taxicab version.

Like “Cash Cab,” in which taxi driver and host Ben Bailey picks up his passenger-contestants at random on the streets of New York, “Cash At Your Door” has Biggs -- the actor best known for the “American Pie” movies -- going door-to-door in typical suburban neighborhoods, ringing doorbells seemingly at random (though he knows each family’s name in advance), and then asking if the family would like to play a spontaneous trivia game in their living room for instant cash.

And like “Cash Cab,” the money totals multiply if the family members can answer the questions correctly. In “Cash At Your Door,” they can win up to $25,000.

“Cash At Your Door” is from the same team that produces “Cash Cab,” and they have brought the same fun, high-spirited attitude to their new creation.

In the premiere episode that E! provided for preview, Biggs applied just the right touch to his handling of these surprised families and the subsequent trivia questions he asked them.

Whoever writes the questions for this show has struck just the right balance between easy and difficult, which makes it easy for viewers to play along.

It also just so happens that the families seen in Episode One are just great, typical American families whose enthusiasm for what is suddenly happening to them is so contagious you can feel the excitement right along with them.

These families are so darned nice that it is heartbreaking when one of them does not survive long enough in the quiz to really win the pot of money they obviously needed right then.

But apparently, nobody goes home (so to speak) with nothing, since everybody wins at least something.

What could be more fun than a quiz show with a happy ending?