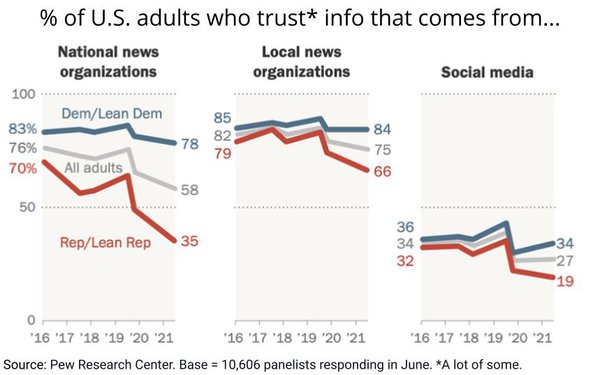 Trust in news media -- both national and local outlets -- has fallen precipitously since the 2020 election, and most of it comes from the growing skepticism of Republican voters, according to the latest in a series of tracking studies conducted by the Pew Research Center.

While the news media trust levels of Democrats or Democratic-leaning voters have also eroded slightly, the dramatic decline among Americans overall has been driven by the partisan divide of Republicans, which has fallen to only 35% who trust national news organizations, and 66% for local news organizations.

According to Pew's tracking, social media remains the lowest level of trust for news information among all Americans, but has fallen to just 19% of Republicans/Republican-leaning voters.

1 comment about "Trust In News Outlets Falls To Recent Low, Especially Among Republicans".
Check to receive email when comments are posted.
Next story loading