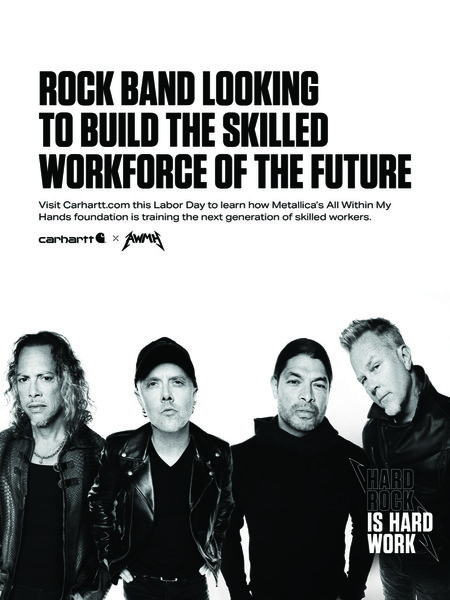 Carhartt is celebrating Labor Day with four guys who know plenty about hard work, especially in metal: Metallica, which is helping the workwear brand recruit new workers to skilled trades.

For its jumping-off point, the campaign plays off Lars Ulrich’s famed 1981 classified ad looking for musicians. (Vocalist James Hetfield replied, and the rest is headbanger history.)

The want ad invited people to call the toll-free number and ask for James. It invited them to attend a skilled trades workshop at Upstaging, a Chicago-area live music and events production company. There, five lucky job seekers got to roll up their sleeves and build a mock Metallica stage piece.

“Many people have the wrong idea about these jobs,” says Jennifer Sopko, director of integrated media at Carhartt. “They don’t know how many different types of work they are and that it can happen in fields as exciting as music.”

That event led to the campaign video, narrated by Hetfield and running on Carhartt and Metallica’s digital channels.

And it’s all meant to drive Labor Day sales on Carhartt’s website, with the Dearborn, Michigan-based company donating every dollar of the day’s sales to All Within My Hands Foundation, the nonprofit foundation Metallica launched in 2017.

The effort supports 23 schools through the American Association of Community Colleges (AACC), enhancing career and tech education programs, helping to fund the Metallica scholars. It directed many of those efforts toward people in the live events business, who lost so much work during the pandemic.

“We have a saying that every day is Labor Day at Carhartt, and we try and take every opportunity to thank people for working in these fields. We want to celebrate them.”

Sopko says the workwear brand had been in talks with the band and decided Labor Day was the big splash required to launch the partnership.

“This is our first work with Metallica,” she tells Marketing Daily, “but it won’t be the last.”

The campaign also syncs up with the release of "Blacklist," a new album. Pollstar rates the band as one of the top touring acts ever. In addition to funding All Within My Hands, the band has long been a partner to food banks in every city it performs in.