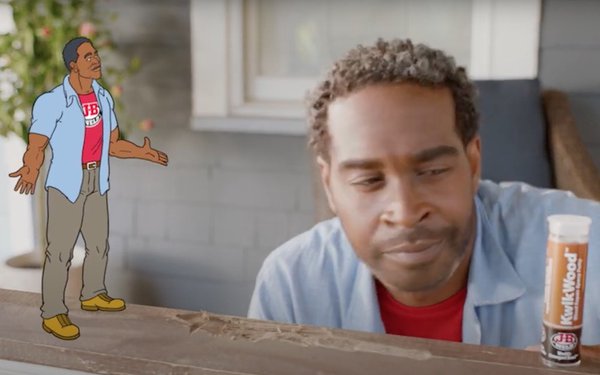 Adhesives and epoxy marketer J-B Weld Co. has launched its broadest marketing campaign in more than a half century to expose its widely distributed products to “burgeoning DYI’ers.”

The goal is less about gaining retail distribution—the company has a presence in more than 50,000 retail locations—than it is about inspiring people to “Be Your Strongest Self” when taking on domestic projects.

Inspiration comes via a mixture of 15- and 30-second spots from the Planet Propaganda agency, which won the J-B Weld account last fall, in which animated “alter egos” coach people through craft and repair projects.

J.J. Sedelmaier, whose credits include “Beavis and Butt-Head” and the “Saturday TV Funhouse” for “Saturday Night Live,” created the animations.

“No matter what you’re working on—whether it’s a build, craft or fix—there’s always that little bit of anxiety where you want to make sure that your time and effort pay off,” J-B Weld vice president of marketing Mark Sng tells Marketing Daily.

In this spot, mom Sherri nervously contemplates creating a mosaic frame for her son’s fourth-grade picture using SuperWeld glue. When she’s done, her alter ego tells her, “We didn’t choose the craft life, Sher-bear. The craft life chose us.”

The DIY projects get more complicated in commercials involving a deck rail patch and repairing a broken metal chair.

“It’s self-reliance that is core to what we want to build in users of our brand,” says Sng. “And that set the tone for where this creative campaign went. Be your strongest self is the call to action in all of the ads.”

A previous brand campaign that ran from 2018 to 2020 was focused mostly on linear television. “This year is the first time we’ve ever run display ads and paid search. And we’re about to really turn the lights back on social channels,” says Sng.

J-B Weld was founded in 1969 with the creation of a two-part epoxy as a substitute for traditional torch welding in a truck-service garage.