'Columbia Journalism Review' Evaluates History Of How It Covered Race 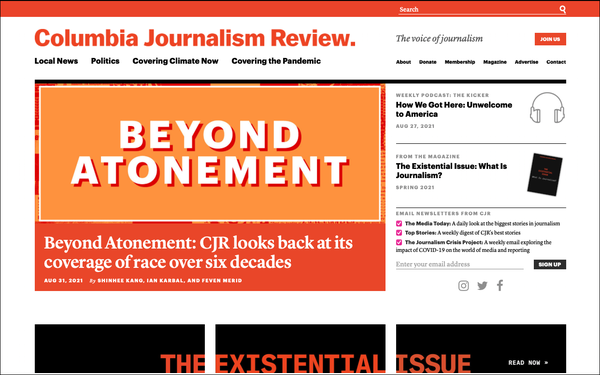 Columbia Journalism Review has joined other publications in putting a harsh light on its own coverage of race.

On Tuesday, CJR published “Beyond Atonement,” an analysis that found “inconsistent, often reactive approach to reporting on racial oppression,” writes Kyle Pope in an editor’s note.

“In the first two decades of its existence, CJR wrote directly and often about race and racism,” Pope reports. “Writers infused moral urgency into their stories, explicitly arguing for the acquisition of equal rights and basic safety for Black people as requirements for a free society.”

“The critical frame of CJR’s prior analyses of race fell abruptly away,” Pope continues. “Instead, many of CJR’s stories framed the pursuit of diversity in the workplace as a threat to the journalistic values of quality and objectivity.”

CJR ignored some stories — such as claims of discrimination by Black employees at the New York Daily News, although it later covered the trial.

Examining the vocabulary of race, CJR admits that it sparingly used the term  “racism” and “white supremacy,” instead resorting to tricks like putting the modifier “racial” in front of other words, implying something vaguely negative — for instance: “Foreign broadcasters have correctly pointed out how racial problems have become more serious in the U.K. ...”

CJR has been working its coverage. It published a 2018 report on how the “American press had failed and continued to fail, nonwhite readers.” And it has conducted this deep dive into its history, suggested by Alexandria Neason.

Moving into a new decade, CJR admits it “still has work to do.”