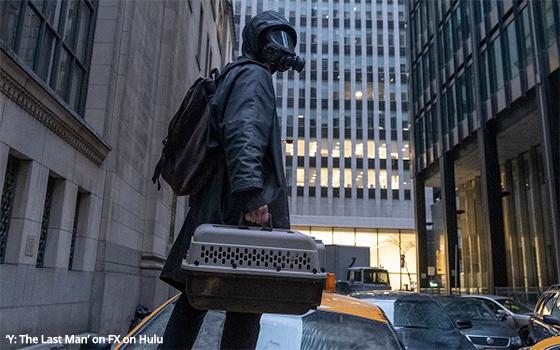 It is also casually profane, and so extremely bloody that it can be difficult to watch. This is especially true near the tail end of the 54-minute series premiere when this show’s particular apocalypse suddenly sweeps across the Earth.

In this scene, blood suddenly gushes out of the mouths of humans and animals and they all drop dead.

The cause of this worldwide disaster appears to be viral, although this is not yet specified in Episode One.

In any case, it is not a nuclear apocalypse stemming from a conflict between nations, nor does it seem to be the result of a diabolical biological weapon either.

For one thing, the early indications are that this is an apolitical illness (if this is what it is) that is affecting nations and people in every corner of the globe regardless of their differences and affiliations.

That is, except for one thing: It is afflicting only men and boys, but not women. Thus, as Episode One comes to a close, the stage is beginning to be set for a world inhabited and run by only women.

However, there is one catch. In an anomaly not explained in Episode One, one man in the entire world appears to have survived this viral onslaught.

He is the “last man” referred to in the show’s title. And the “Y” in the title is a reference to the Y chromosome that is a characteristic of male DNA, but not female. The conclusion is that, whatever this illness is, it is targeting Y chromosomes, and not X ones.

The show’s depiction of this apocalypse is very well-choreographed. It is so effective that you feel the same terror the characters on screen are experiencing.

On the other hand, feeling terrified is not necessarily synonymous with being entertained for many.

However, for those who enjoy a good fright, and do not mind a great deal of blood and a lot of casual profanity (just like the real world, right?), then “Y: The Last Man” is the show for you.

“Y: The Last Man” starts streaming on Monday (September 13) on FX on Hulu.