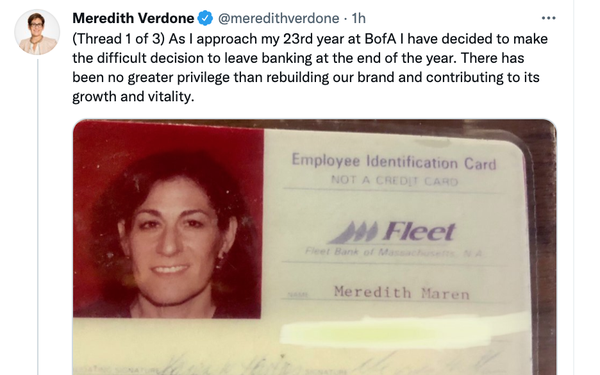 Longtime Bank of America executive Meredith Verdone, who has been CMO the past four years, is leaving the company.

“As I approach my 23rd year at BofA I have decided to make the difficult decision to leave banking at the end of the year,” she wrote. “There has been no greater privilege than rebuilding our brand and contributing to its growth and vitality. I have been fortunate to work with tremendous people who are deeply committed to our clients, our communities and to what’s right. I am certain all of my teammates will have continued success. As for me… I’ll be taking a short breather for the winter to follow the snow — and I’ll keep you posted as the next chapter unfolds.”

Verdone took the CMO position in May 2017. She was responsible for brand strategy and consumer, affluent and high-net worth marketing across the corporation.

In 2018 under Verdone’s leadership, the bank announced a new brand positioning focused on the question, “What would you like the power to do?”

The positioning was supported by a multiyear campaign featuring clients, communities and partners. Those featured in creative included moviemaker Ken Burns and actor Matt Damon.

Prior to her long tenure at Bank of America, Verdone was an account manager at Hill Holliday for 13 years. She held management positions in both media and account management, according to her LinkedIn profile, and worked on the John Hancock TV campaign as well as national, multimedia campaigns for PricewaterhouseCoopers, Spalding and Reebok.

The bank announced  a slew of senior leadership changes Friday morning. The company is adding five new members, including three women, to the senior management team.

When all of the changes are complete, Bank of America’s senior management team will include individuals with an average of 21 years of service in the company and 31 years in the financial services industry, with increased global and international expertise, and more diversity of gender and race than ever before in the company’s history, according to the company.

Although Verdone’s departure was not announced in the release, it did detail how other execs will pick up marketing duties.

David Tyrie will become chief digital officer and will also add global marketing to his responsibilities. Tyrie most recently served as head of digital banking.

D. Steve Boland has been named chief administrative officer, with duties that include global sports sponsorships. He will also continue as a vice chair of the bank’s global diversity and inclusion council. Boland was president of retail banking and head of the community bank and consumer lending. He joined the company in 1995.