New For Fall: Fox Takes 'Big Leap' With Show About A Show 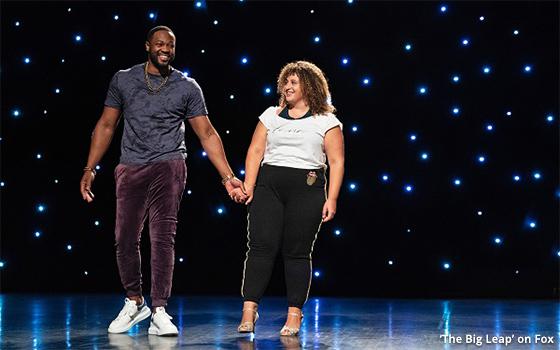 The new fall Fox series “The Big Leap” is a scripted TV drama about an unscripted reality-competition dance show -- basically, a show about a show within a show.

As such, the show feels new and innovative, and it is both of these things up to a point.

The only other scripted drama series in memory that chose the world of reality television as its central focus was the savage “Unreal” on Lifetime that was about the backstage drama at a fictional reality dating show (modeled after “The Bachelor” and its various spin-offs).

“The Big Leap,” however, is a scripted show about a dancing reality-competition show. In contrast to “Unreal,” where no good came out of anyone’s association with reality TV, “The Big Leap” is styled as redemptive, upbeat and uplifting, at least potentially.

In other words, the show’s central message (if there is one) is that second chances in life are possible. And in this case, they are made possible by one’s participation in a prime-time dance-competition show -- a notion that is debatable.

As the show gets underway in Episode One, we meet a group of fictional characters from different walks of life whose lives are mired in various ruts.

What they have in common is unhappiness and dissatisfaction with the state of their lives in which they have been so far unable to realize their dreams.

And for some of them, at least -- such as the character of Gabby Lewis (played by Simone Recasner, above photo, right) -- dancing was their dream.

If there is a central character in this ensemble series, then Gabby is the one who is seen the most frequently and shows the most pluck. She is a very likable character and the heart and soul of the show.

But she is far from the only one trying to pick up the pieces of his or her life in “The Big Leap.”

The others include a middle-aged woman and one-time ballet dancer (Teri Polo) whose husband has lost interest in her, another former dancer (Piper Perabo) who is battling cancer, a man (Jon Rudnitzky) who recently lost his job and his wife, a young man (Raymond Cham Jr.) working in a bowling alley, a pro football player (Ser’darius Blaine) who is trying to make a comeback following a public scandal, and others.

Some of the details of their stories are so sad that they make the show difficult to watch at times. However, the TV Blog realizes why the writers of this show have made some of the characters’ backstories so woeful.

It is because the depths of their despair will make their eventual redemptions even more dramatic.

One of the features of this show that came as a surprise was the adult nature of some of the dialogue and situations that have been created for the show.

The mature content seems out of place in a prime-time dance drama whose main subject matter -- dancing -- is almost certain to attract some young viewers.

One thing the show gets right, however, is its depiction of the “Big Leap” showrunner (played by Scott Foley) who has a sharp eye for reality drama. And when there isn’t any, he creates it.