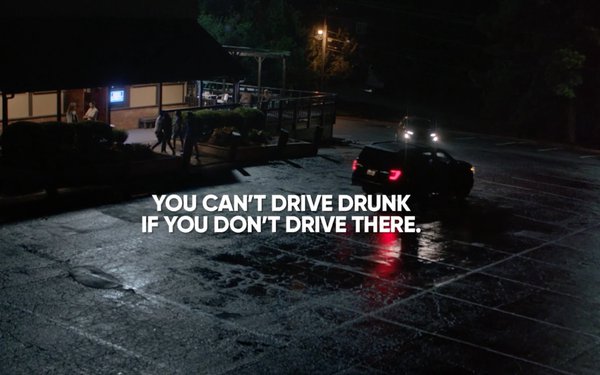 The country’s largest alcoholic beverage company, ride-sharing service and anti-drunk driving advocacy group have teamed up on “Decide to Ride,” a multiplatform campaign promoting awareness and safe rides that features the line, “You Can’t Drive Drunk If You Don’t Drive There.”

While campaigns encouraging designated drivers and ride-shares to get home from alcohol-serving venues have been common enough in the past, one of the new coalition’s aims is to get drinkers to depend on others for transportation both to and from destinations.

The campaign would seem to represent a win-win-win situation for the three partners: Anheuser-Busch, Uber and Mothers Against Drunk Driving (MADD). After all, when consumers aren't driving, they’re likely to drink more A-B alcoholic beverages, use Uber more often, and hopefully move MADD further toward its goal of “zero deaths and zero injuries.”

Announced this morning, the campaign -- with creative by A-B’s in-house agency draftLine and media buying by Dentsu -- begins with digital, print and out-of-home ads, the coalition said. Assets provided in advance to the media included :06, :15 and :30 videos, each featuring drinkers being dropped off at venues by unidentified drivers; digital radio banners; and Snapchat ads.

The campaign also includes integrations through A-B’s Bud Light, with more than 20 NFL teams in-stadium, on local broadcast and in social media. On national NFL broadcasts, the “Decide to Ride” message will be included in Bud Light’s responsible drinking billboards.

In seven markets -- Atlanta, Denver, Phoenix, St. Louis, Cincinnati, Houston and Washington, DC -- paid media will include a code for a 10% Uber discount.

Before consumers go out, the aim is to hit them with “Decide to Ride” ads on Instagram, Spotify, Facebook and Pandora. While they’re out, they’ll be targeted with Twitter ads and via TouchTunes jukeboxes. On the way home, the messaging will be reinforced with digital out-of-home and Snapchat filters.

Since its founding 41 years ago, MADD has seen alcohol-impaired driving fatalities drop by 52%, but says the number flatlined to around 10,000 fatalities annually over the past decade and actually increased during the pandemic.

Anheuser-Busch, for its part, says it has been creating drunk-driving campaigns for nearly 40 years. It previously collaborated with Uber on such programs as a 2016 Budweiser campaign that offered London drivers a free rides home during the holiday season.

“By working together, we can make a greater impact while complementing the various initiatives and campaigns we each support to help put a stop to alcohol-impaired driving,” said Cesar Vargas, Anheuser-Busch chief external affairs officer.

Dennis Cinelli, Uber vice president of US & Canada mobility operations, noted a couple of recent studies showing how the 11-year-old service reduces alcohol-impaired traffic fatalities. “With greater access to transportation options—including Uber and public transportation—there is no excuse for drunk drinking,” Cinelli said. “We hope this campaign encourages people to make the right choice, plan ahead and not get behind the wheel while impaired.”