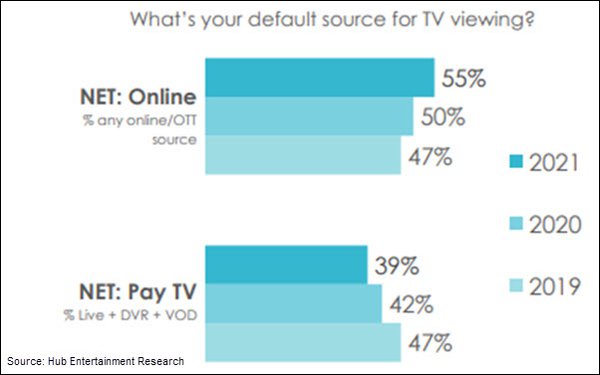 When it comes to TV viewing, paid or free online streaming services are the first destination for 55% of U.S. broadband consumers, compared to 39% heading first to traditional linear, DVR or VOD pay-TV services, according to Hub Entertainment Research’s latest “default” viewing sources study.

Last year, online/OTT sources were the default for 50% of those surveyed, and 42% went first to pay-TV sources. (The rest are those who default to viewing over-the-air, from an antenna.)

For this year’s research, Hub surveyed a census-balanced sample of 1,616 U.S. adults 16 to 74 who have broadband and watch at least an hour of TV per week. Data collection was completed in August.

As recently as 2019, pay-TV sources accounted for half of viewers’ total TV time. Now, it’s down to a third. 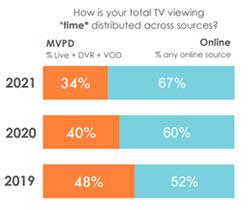 Hub, which began studying viewing-source defaults in 2013, reports that while the percentages of consumers defaulting to live TV from cable, satellite or telcos have been declining within every age group, the trend is particularly pronounced among younger consumers. 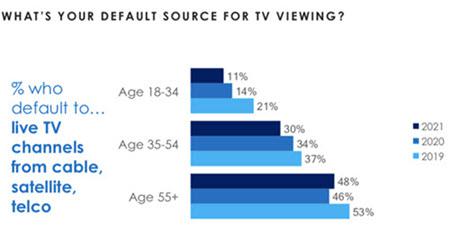 Younger consumers are also the primary force behind a significant decline in Netflix’s stance as the go-to streaming service.

Until 2018, Netflix was on track to surpass traditional pay-TV as the default choice. But while it’s still by far the streaming service default leader — and it’s the overall default platform for a fifth of consumers — it’s lost three points since 2020. 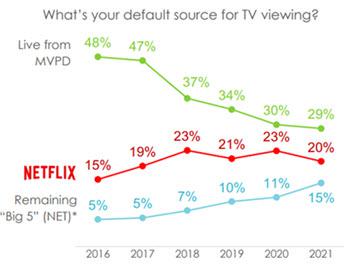 Meanwhile, the other four most popular streaming services—Hulu, Amazon Prime Video, Disney+, and HBO Max — have gained four points in the past year alone. 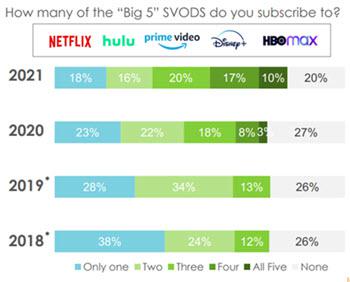 Those 18 to 34 are still the most likely to default to Netflix — 31%, versus 20% among those 35-54 and 6% among those 55 and up. But the Netflix bias among the youngest group dropped by eight points in the last year alone, as their tendency to default to the other big streamers has increased. 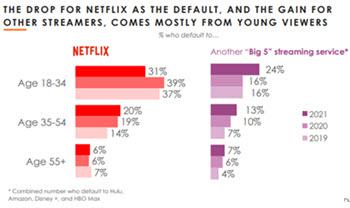 As for the overall scenario, the average number of TV sources has risen from three in 2018 to nearly six currently, thanks to new streaming platforms — including the rapidly expanding free, ad-supported options — combined with many providers’ shift to making their best content available on streaming platforms.

And while the number with streaming-only services hasn’t changed much in the past year, the traditional-TV-only group has dropped by half.

Still, seven in 10 use both streaming and traditional — up nearly 10 points since last year. 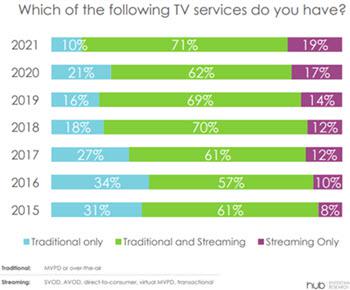 research, streaming, television
3 comments about "55% Of TV Viewers Go First To OTT, Vs. 39% To Traditional Pay-TV... But Netflix Is Losing Ground".
Check to receive email when comments are posted.
Read more comments >
Next story loading