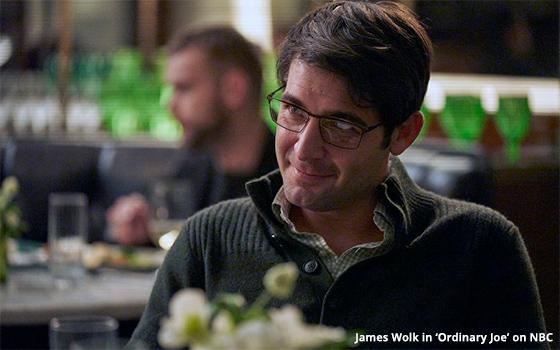 A new fall drama on NBC contains three times the tearjerking potential of most other prime-time network dramas thanks to a format that allows it to tell three heart-tugging stories at once all about the same guy -- a guy named Joe.

The show is “Ordinary Joe” (premiering Monday night), and its three-story format makes it far from ordinary.

It is also above average (as in “average Joe”), but how far above really depends on how much tear-jerking drama one can tolerate in an hour-long TV show.

However, judging by the success of NBC’s already formidable tearjerking drama “This Is Us,” audiences have been shown to embrace the sadness and emotion that these shows offer, even when it is laid on thick.

That happens to be the case with the series premiere of “Ordinary Joe,” which seems to try extra hard in the very first episode to establish itself as the tearjerking successor to “This Is Us,” which is supposed to return in midseason for what will be its final season.

The scenario is this: A young, ordinary guy named Joe is seen on the day of his graduation in 2011 from Syracuse University.

After the graduation ceremony, we see that Joe has three choices to make. The show’s contention is that each of these three choices will lead to three very different outcomes for Joe over the next 10 years of his life.

The show then goes on to show us each of these lives in a more or less parallel fashion, cutting back and forth between them.

In actual execution, this is less complicated than it sounds, which is to say: The people who dreamed up this scenario actually do make it work in such a way that you don’t sit there in a state of confusion over which one of Joe’s lives you are seeing at any given moment.

Without giving too much away, depending on the choice he made on that fateful graduation day, Joe could have become a rock star, a New York City cop or a hospital nurse (also in New York).

He also would have ended up with different love interests, homes, a child or two, and other variations.

So, that’s the explanation. The good news about this show is that it seems to have met the challenge posed by its three-story format, as mentioned above.

But also mentioned above is its tendency to pile on the emotional scenes and circumstances with such frequency that the experience of watching the show can be dizzying and, in no small measure, depressing.

With its 10-year time span stretching from college graduation in 2011 to the present day when, presumably, the post-graduate lives and careers of the 2011 grads are well underway, this show seems primarily aimed at viewers who might fall into that age group and can identify with Joe and his dreams, regrets and above all, his choices.