'Elizabeth Is Missing' Is The Finest TV Movie In Memory 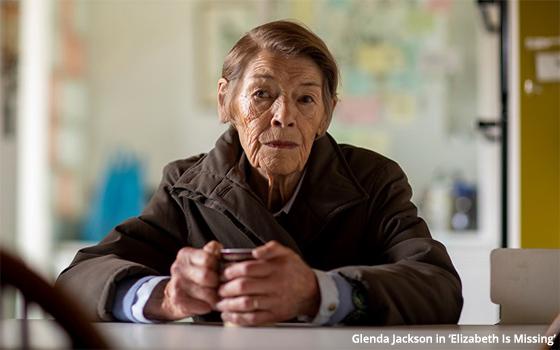 By happenstance, I caught the most astonishing TV performance I have seen this year Sunday night on PBS.

In fact, I will venture to say that it was the most masterful performance I have seen in a theatrical or made-for-TV movie in approximately a quarter century.

The word “masterful” was purposely chosen because this TV movie, originally produced for British television and debuting there in December 2019, turned up this past weekend on PBS’ “Masterpiece,” which aired it at least once before in January 2021, according to an on-line source.

Running for about 90 minutes, this one-off movie was called “Elizabeth Is Missing,” and its central role of Maud Horsham, a woman in her 80s living with the debilitating, confusing, alienating effects of progressive Alzheimer’s disease, was played by Glenda Jackson, 85 (pictured above).

No doubt she was greatly aided by the movie’s source material -- a novel of the same name by Emma Healey that was adapted by Andrea Gibb into one of the finest scripts heard on TV in memory, plus support from a stellar cast including Helen Behan as Maud’s daughter, Sophie Rundle as Maud’s long-dead older sister (seen in flashbacks) and others.

The director of the movie was Aisling Walsh, and its principal producers were just about all women also.

What they put together was a searing, deeply moving portrait of a woman in the twilight of her life trying to remain in sync with her world while also slipping slowly away from it.

But wait. There’s more. “Elizabeth Is Missing” is much more than an Alzheimer’s movie, even if Maud’s condition is the primary driver of its interlocking storylines -- two of which are mysteries, one in the present day and another from Maud’s youth in 1949.

The latter mystery is the story that involves Maud’s sister, Sukey. And the manner in which the movie seamlessly blends the past and present, all seen through the prism of Maud’s Alzheimer’s disease, is a wonder to behold.

As viewers, the effect is literally as if we are inside Maud’s head and seeing the world through her eyes.

The modern-day mystery involves Maud’s friend Elizabeth, who Maud suddenly comes to believe is missing -- and, despite Maud’s entreaties, no one will help her find her friend.

Maud’s belief that Elizabeth is missing seems like a figment of her imagination resulting from her Alzheimer’s-induced befuddlement. But is it?

Whatever the truth turns out to be, Maud’s Alzheimer’s emerges as the key to solving both mysteries in a series of plot twists that are thrilling to experience.

Come to think of it, almost this entire movie consists of plot twists and sudden, unpredictable events in the life of Maud.

Suffice it to say that besides all the help Glenda Jackson got from all of the aforementioned support, the character of Maud and the mesmerizing way Jackson plays her is the main attraction.

Watching this performance is a jaw-dropping experience.

In this way, “Elizabeth Is Missing” earns its “Masterpiece” title in a way that few made-for-television productions ever do. The movie reminds us that TV can produce great things, once in a great while.

“Elizabeth Is Missing” can be seen in its entirety on PBS.org through October 10. After that, it will be available on the PBS Passport subscription streaming service until 2025.