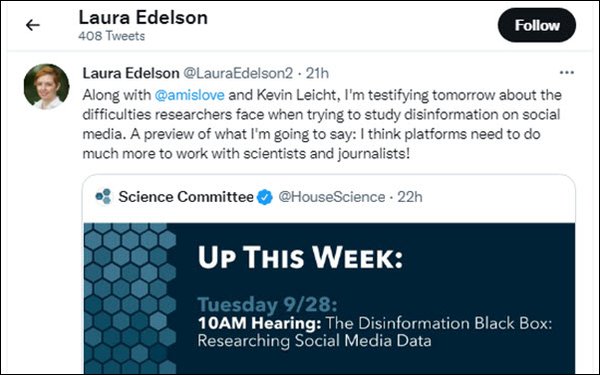 On Tuesday, one of academic advertising researchers whose work was shut down by Facebook will appear before a Congressional subcommittee to advocate policies that would mandate advertising transparency for internet platforms and establish legal protections for researchers and journalists.

In August, Facebook suspended the personal accounts of lead researcher Laura Edelson and her colleagues in New York University’s Ad Observatory project, which has been investigating online advertising and targeting. Facebook also shut down the pages associated with the research, and researchers’ access to the Facebook APIs needed to share Facebook data to other app.

Facebook, however, claims that the researchers were scraping data in violation of its rules — which prohibit collection of its platforms’ data using automated means, without permission — and interfering with the platform’s compliance with its July 2019 agreement with the Federal Trade Commission.

A proposed “universal advertising transparency” policy would require platforms to provide, without restrictions, data including who is paying for ads and how much, as well as data on targeting, impressions, reach and other specifications.

Safe-harbor legal protections would be established to cover researchers and journalists who are investigating platforms’ operations, “as long as they handle data responsibly and adhere to professional and ethical standards.” These protections would serve to clarify the legality of ongoing investigations.

Platforms would also be required to make all public content with “meaningful reach” available through public tools or searchable interfaces.

Cybersecurity for Democracy argues that it’s time that the big social media platforms give the public access to the same data they already make available to advertisers.

“Every day that my team cannot access the Facebook data we need to do our research, we fall further behind in the race to find answers” about online misinformation, Edelson will state in her pre-released testimony.

Such misinformation “has created an enormous public health crisis, and we need rigorous science based on data on how to deal with it — just like we did with Big Tobacco, industrial pollution, and drunk driving,” she asserts. “Facebook’s behavior is anti-science and anti-progress. It’s clear Facebook can’t be trusted to provide the transparency we need to move forward — and so we need lawmakers to compel them to disclose the data.”

The policies were co-developed with Mozilla and the Knight First Amendment Institute at Columbia University.

Mozilla, which has long touted its Firefox browser as providing superior privacy for users, reviewed the Ad Observatory’s browser extension, the Ad Observer, to ensure its privacy and data collection practices are up to standard, according to the company.

Mozilla Chief Security Officer Marshall Erwin, who recently authored a blog post outlining arguments as to why Facebook’s claims about the Ad Observer are wrong, says that Mozilla’s Rally data-sharing platform was built to “help take back control of research from unresponsive platforms like Facebook.”