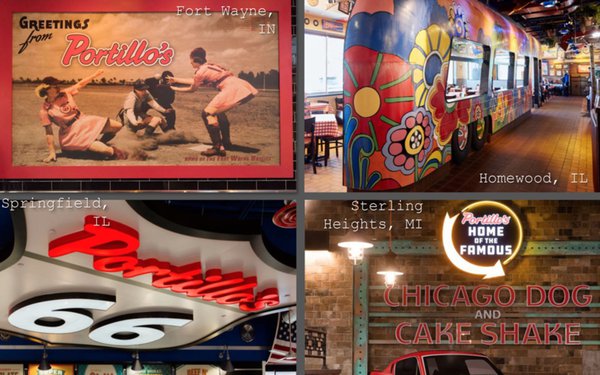 Having grown from a single “dog house” trailer to 67 locations in nine states, iconic Chicago fast-casual chain Portillo’s believes it can expand to more than 600 restaurants in the next 25 years.

"Our restaurants have attracted a growing cult-like following that has enabled us to thrive across a variety of suburban and urban trade areas around the country,” Portillo’s said in an initial public stock offering filing with the Securities and Exchange Commission on Monday.

Although the fast-casual dining chain did not specify the number of shares it might offer, The Wall Street Journal reported in July that the company was targeting a valuation of $2.5 billion to $3 billion, citing people close to the company.

Portillo's was founded in 1963 by Chicago hot dog vendor Dick Portillo, who sold the company to private equity firm Berkshire Partners LLC for nearly $1 billion in 2014.

The chain is best known for serving hot dogs, sausages and handmade chocolate cake in locations whose design concepts reflect nostalgia and local influences and are never duplicated. Themed décors range from a 1930’s prohibition motif to a 1950’s jukebox and a 1970’s hippie bus—with period music tied to the themes.

Unlike most fast-casual chains, nearly all Portillo’s locations feature double-lane drive-throughs, which enabled it to cope with the impacts of COVID-19. Its average unit drive-through sales grew from $3.4 million in 2019 to $4.9 million in the 12 months ended June 27.

“All of our restaurants are profitable, and we are proud to have never closed a restaurant in our 58-year history," the IPO document notes.

Asked for clarification about the impact of the pandemic, a Portillo’s rep tells Marketing Daily,“Portillo’s did not have to close any restaurants due to the pandemic.”

“Since nearly all of our restaurants were purpose-built with a double-lane drive-through and sizable parking areas to handle our large volumes, we were able to quickly respond to sales shifts without structural changes to our sites,” according to the IPO statement.

Portillo’s attributes its “cult-like following” in part to “a very engaged and passionate following on social media.”

“Many of our fans beg us through social media to bring a Portillo’s restaurant to their city (and we have received similar pleas from mayors), which we believe is indicative of the passion of our guests and the demand for more Portillo’s locations across the country,” the IPO document notes.

The chain’s YouTube videos focus mainly on food as opposed to deals, as in this week’s post.

“We do not discount and rarely engage in price promotion of our products,” the IPO document states.

An analysis by Forum Analytics suggests the company has “a substantial runway for growth, with a long-term opportunity to grow to more than 600 restaurants domestically over the next 25 years and [is] well-positioned for global growth in the future.”