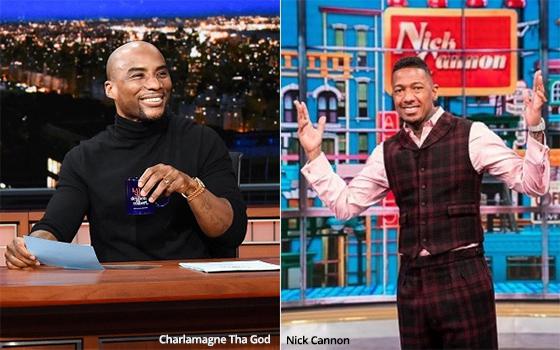 Other forms of bigotry get their practitioners canceled in our culture today, but two who issued anti-Semitic statements a year ago now have their own talk shows.

The two shows premiered earlier this month. One of them, the new Nick Cannon talk show -- titled simply “Nick Cannon” -- made its debut in national, daytime syndication this past Monday (September 27) on 193 stations of various sizes (according to the show's own web site).

“The God's Honest Truth” premiered on Friday, September 17, at 10 p.m. Eastern, where it will now be seen regularly.

In July 2020, each of them aired their views about Jews.

Cannon, 40, carried on a lengthy discussion about Jews on his podcast, “Cannon’s Class,” with his guest that day, Richard Griffin, 61, also known as Professor Griff, an original member of the rap group Public Enemy.

Quotes from this podcast were widely reported (some inaccurately, truth be told) in the days following the conversation, a great deal of which was devoted to a discussion about world history and the conquering ways of white people, including Jews.

During the conversation, Cannon made references to “the Rothschilds,” “centralized banking,” “the 13 families” and “the bloodlines that control everything even outside of America …”

Anyone familiar with the arc of anti-Semitism throughout world history recognizes these suggestive phrases as tropes that have echoed down the ages.

For the full context of this conversation, a transcript can be found here.

After the news about this conversation broke, ViacomCBS fired Cannon, who was then hosting “Wild ’n Out” on VH1. The company later rehired him after he issued a public apology.

In addition to serving as host of “Wild ’n Out,” Cannon is credited as the show's creator and one of its executive producers.

Cannon's new, syndicated talk show was supposed to premiere last September but was held up for a year by syndicator Debmar-Mercury in the wake of last summer's controversy. Today, Cannon also hosts “The Masked Singer” on Fox.

In defense of Cannon, Charlamagne was widely quoted from his own podcast, “The Breakfast Club,” as having said: “Listen, Nick is my guy. I hate it had to be him, but that's what you can do when you have the power. And if there's one thing Jewish people have showed us, it's they have the power. I can't wait until the day black people are able to fire people for saying things about us that we deem racist. We can barely get cops fired for actually killing us!”

This fall, it is clear that Nick Cannon 's and Charlamagne Tha God's statements in July 2020 have not resulted in their disqualification, exile or banishment from the industry in which they make their living.

Rather than “cancel” them -- i.e., prevent them from appearing in public forums like so many others who have been caught up in today's cancel culture (some for the right reasons, and others not) -- they have received a reprieve of sorts that one might also frame as an opportunity.

They each now have national platforms on which to talk. Perhaps they will come to see their platforms as opportunities to bring people together and, in the process, make our world a better place.

television, viacomcbs
1 comment about "A Year After Anti-Semitic Comments, Two Hosts Have New Talk Shows".
Check to receive email when comments are posted.
Next story loading