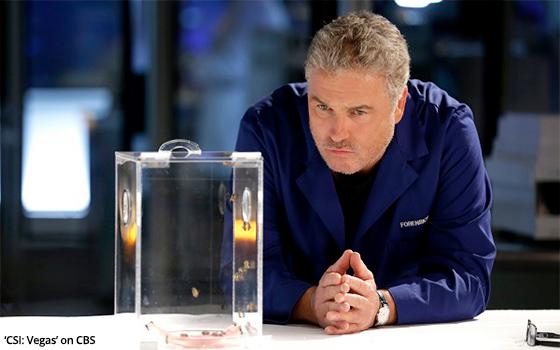 CBS is continuing its reliance on the tried-and-true this fall with a revamped, updated version of one of its most storied series, “CSI.”

Originally titled “CSI: Crime Scene Investigation,” the mothership of the “CSI” franchise aired for 15 seasons from 2000 to 2015.

Three spinoffs were made from the original -- “CSI: Miami,” “CSI: NY” and “CSI: Cyber” -- none of which are still being made.

This month, however, CBS is seeking to revive the “CSI” world of high-tech forensics labs, and the overly enthusiastic geniuses who inhabit them, with “CSI: Vegas.”

The show is a direct descendant of the original “CSI,” which also focused on the Las Vegas PD’s forensics department, although “Vegas” was not in the show’s title.

This new Vegas-based procedural introduces new characters and brings back some old ones.

The reason why the former CSIs come scurrying back to their old stomping grounds is a contrivance: One of their own was attacked by a would-be assassin and survived, indicating that some violent criminal from a past investigation is back and seeking revenge against the forensic scientists who outsmarted him.

Thus, the story goes, the old CSIs must reunite to solve the case, even if it means stepping on the toes of the current generation of CSI staffers who are also geniuses and seem quite capable of handling the job.

In the real world, the sudden appearance of a group of hotshots who left long ago and are now invading the offices they have not occupied in years would not sit well with the present-day staff of any workplace or office.

But in the premiere episode of “CSI: Vegas” in which this whole set-up gets introduced, everyone involved is all smiles and mutually respectful.

In short, except for the badly mangled bodies of murder victims and other objectionable detritus of brutal violence that are strewn about the place, the LVPD CSI lab is the happiest workplace on Earth.

In fact, sometimes it seems a little too happy. When previewing the premiere episode of “CSI: Vegas” yesterday, I was struck by some of the old show’s characteristics that I found off-putting then, and still do today.

One of them is the cavalier way these scientists joke around, laugh good-naturedly and play lighthearted games of forensic one-upmanship, all while standing over the remains of some poor soul and manhandling his or her internal organs.

The other is the squishy way that the “CSI” shows take the viewer “inside” their investigations, by which I mean an up-close-and-personal tour of the torn innards of murder victims as we follow the slow-motion trajectory of bullets entering bodies, wreaking fatal havoc within them and then exiting.

This always struck me as gross. And it still does. However, anyone with half a brain (such as yours truly) accepts the fact that millions of people were not similarly repelled by these kinds of scenes. On the contrary, three of the four “CSI” shows were huge hits.

It is for those multitudes that most of the cast of the old “CSI” has been reunited for this new one -- including William Petersen as Gil Grissom (pictured above), Paul Guilfoyle as Capt. Jim Brass, Jorja Fox as Sara Sidle and Wallace Langham as David Hodges.

Missing in action are Marg Helgenberger, whose character of Catherine Willows is said to be away somewhere looking after some grandchildren, and George Eads (who played Nick Stokes) whose whereabouts are not mentioned.