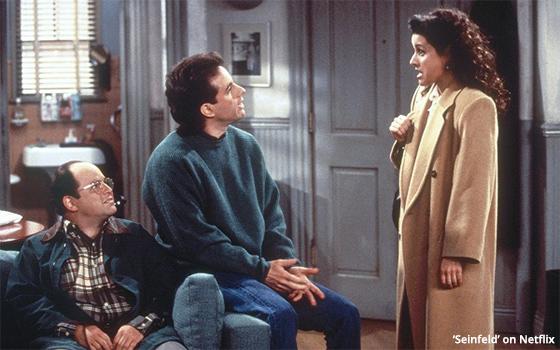 The debut of “Seinfeld” last Friday on Netflix has generated some complaints about the way Netflix is presenting this show in a modern-day video format when it was presented originally in another.

But I suspect that the complainers represent a small portion of the multitudes who will watch “Seinfeld” on Netflix.

At issue is the show’s original, “boxy” format -- the 4:3 ratio common to the period when the original nine seasons of “Seinfeld” aired on NBC, 1989-98, when TV screens were also boxy.

Netflix, however, is showing a version of “Seinfeld” that uses today’s 16:9 aspect ratio common to high-def TVs. This means that the frames are wider and narrower (not as deep) than they used to be.

This, say the complainers, has the effect of cutting off pieces of the show. Generally speaking, they are referring to whatever was seen at the bottom of the frames.

They even claim that the missing visual material is sometimes crucial for understanding some gags and conversations between characters on the show.

To give credit where credit is due, I came across this story yesterday on Yahoo, which appears to have picked it up from Slate.com.

While the stories make a good point, I think the manipulation of “Seinfeld” for the format Netflix uses will not be an issue for most people for the simple reason that they won’t even notice it.

For example, I have no idea whether similar outcries were ever heard during the long run of “Seinfeld” in broadcast syndication, in which it still apparently thrives.

Nitpickers could easily pick some nits over the way this revered show is presented on local broadcast stations.

Among the nits: The show has aged to the point where the video tends to look washed out; reports arise from time to time that snippets of the shows have been sliced out of them to accommodate more commercials (which seems entirely feasible); and, in the case of Channel 11 where “Seinfeld” airs in New York, the station actually positions intrusive ad billboards during the show at the bottom of the screen that seem to take up about a fifth of it.

All of these things are worth griping about, as are the formatting concerns of the “Seinfeld” episodes on Netflix (which picked up the show after Sony’s rights deal with Hulu expired last June and was not renewed).

But to what end? Historically, TV shows have long endured this kind of treatment. For many years, most (if not all) off-network TV shows were not maintained in their pristine original conditions nor handled with kid gloves.

Cuts were made for more commercials, and the quality of the video (i.e., the picture) was seldom upgraded or probably even considered for many years.

Today, with cash-rich streaming services picking up shows such as “Seinfeld” and “Friends” (and presumably more such shows from the same era), perhaps an opportunity presents itself for older TV shows -- TV’s “heritage,” you might call it -- to be restored to something like mint condition, with all excised material put back in.

However, there is no TCM for TV shows as there is for movies. TCM almost always obtains the best prints of its old movies, and even participates in various film preservation efforts.

TV shows, on the other hand, do not enjoy similar attention and care. I’m sure I am not the first observer of the television industry to wonder if it will ever come to pass that a TCM-level channel will ever be created that will present classic TV shows with the same reverence TCM has for its movies.

Such a TV channel could even find someone to serve as a TV version of Robert Osborne -- maybe some long-time journalist on the TV beat perhaps?