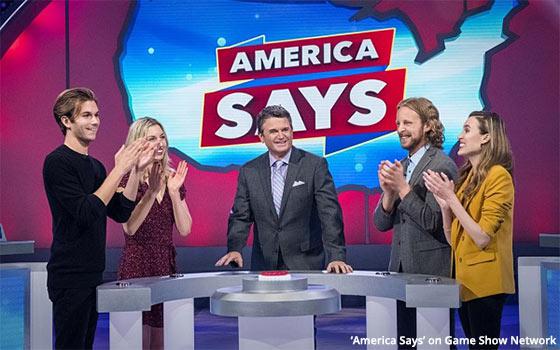 This star-spangled show is called “America Says,” and it features ordinary Americans playing a fill-in-the-blank game that is presented in such a way that a viewer at home cannot help but play along.

The show is exuberant, confident, fun, good-natured and optimistic -- just like the great, near-perfect nation it celebrates and for whom it was created: America!

This red, white and blue, all-American quiz show is such a big hit for GSN that it has come to dominate the network’s prime-time schedule with multiple episodes airing back-to-back on most evenings, with other showings dotted throughout GSN’s daytime schedule.

The star of the show is comic actor John Michael Higgins. He has been seen in numerous TV shows and movies, but he is perhaps best known for his participation in the Christopher Guest movies “Best In Show,” “A Mighty Wind” and “For Your Consideration,” and both “Pitch Perfect” movies.

“America Says” represents the first time he has ever hosted a game show, which many people in Hollywood realize is good work if you can get it.

Higgins succeeds as a game show host because he manages to come across as easy-going and loose, while at the same time, he is very adept at managing his on-stage contestants without really showing that he is in control of them.

This has long been one of the primary responsibilities of TV game show hosts who interact with contestants in close proximity to them.

The host is the only professional on camera and on stage, where everyone else -- the contestants -- are rank amateurs who have no idea how to comport themselves in a TV studio.

Bob Barker once told me that contestants on “The Price Is Right” who he stood near for the show’s various segments used to get so excited that some of them would grab him, hug him, or jump up and down so uncontrollably that they would bump into him bodily or they would land on his feet or lower leg.

Contestants jumping around uncontrollably does not necessarily afflict Higgins on “America Says,” which is a good thing because there are usually eight of them divided into two teams of four.

They are grouped like the competing families on “Family Feud,” but the four-member teams on “America Says” are not necessarily related, but often a group of friends.

The show is light-hearted, to say the least -- an antidote to so much else that passes before us on our video screens.

As noted many times here, the world of linear TV and streaming video on demand is often a nihilistic, unhappy place populated by sullen misfits and characterized by sudden bursts of bloody violence.

“America Says” and other game shows stand in stark contrast to all that. They are a very old and very necessary part of the TV universe. Who says? “America Says!”