New For Fall: Sitcom 'Ghosts' Is A Thing Of The Past 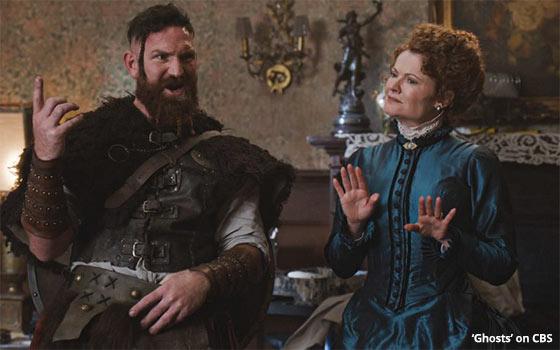 A new fall sitcom premiering Thursday night on CBS feels like a throwback to the wacky world of 1960s television.

This is not intended as a compliment. The 1960s were characterized by a slew of shows based on ridiculous premises -- a talking horse and a talking car, a suburban housewife witch, a nun who could fly, a group of people living on a planet of giants, two shows about families of ghouls, one comedy about two teen-aged girls who were identical cousins and on and on.

Cut from the same cloth is this new CBS show called “Ghosts.” It is about a young couple from New York City who come into possession of a very old upstate mansion and then begin working toward their dream of restoring this huge, decrepit old house and turning it into a country hotel (it is a good deal larger than the kinds of old houses some people turn into Bed and Breakfasts).

But, by golly, this house comes with a very peculiar challenge -- it is populated by a gaggle of funny ghosts! Cue the 1960s laugh track.

They are the restless spirits of people from a variety of eras who are now long dead. All of them met their ends in or around this house, or on the very same piece of land long before it was built.

These spirits are not exactly evil. In fact, they are reasonably genial for ghosts. But at the same time, they are not above doing a little haunting.

In the first episode of “Ghosts,” they contrive various haunting strategies for driving the home’s new owners back to New York. But unfortunately, these ghosts are not very skilled in the haunting arts.

What’s their beef? Well, they are annoyed in general by the prospect of this couple moving into a house they consider their own.

Plus, they are doubly alarmed by the couple’s plan to turn the place into a hotel that might draw crowds of intrusive visitors.

The comedy, such as there is, is supposed to stem from the eccentricities of these ghosts and the comedic way in which each is played -- such as the stereotypical gay man who was once a militia man in the American revolution.

He is the kind of ridiculous character who might have been played by Charles Nelson Reilly or Paul Lynde in another era of television.

The premise is that this group of ghosts -- eight in all -- are able to behave, converse and carry on rambunctiously with each other, but they are unseen and unheard by this young couple.

But suddenly, before you can hum the first few bars of the “Bewitched” theme song, the female member of this couple develops the ability to see and hear the ghosts, while her put-upon husband cannot.

He is “Darren” to his wife’s Samantha, a point that is driven home either intentionally or otherwise by the decision to actually name this woman “Sam.”

She is the one who has inherited this house from an obscure aunt who has recently died in the house, but does not appear to be haunting it, however.

How the makers of this show will keep this absurd TV show going each week for up to 22 episodes is a mystery to me.

Sure, 50-plus years ago, “The Munsters” and “The Addams Family” managed to keep their stories going for two seasons each. But they competed with just two other networks.

Here in the present day, with so much to watch and choose from on hundreds of networks and streaming services, a silly throwback network sitcom about high-spirited spirits doesn’t stand a ghost of a chance.

television
2 comments about "New For Fall: Sitcom 'Ghosts' Is A Thing Of The Past".
Check to receive email when comments are posted.
Read more comments >
Next story loading