GroupM: Chinese Marketer Spending On Facebook Now $10B Annually, 'Many Billions More' On Google And Amazon 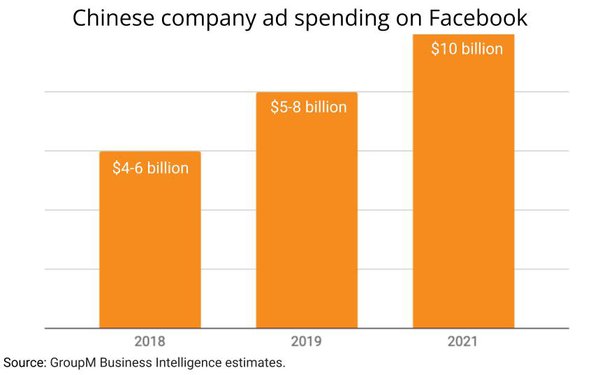 Marketers based in China now account for as much as $10 billion in advertising buys on Facebook, according to a GroupM Business Intelligence analysis of data disclosed by the social network.

That's up from as much as $8 billion in 2019, and as much as $6 billion in 2018, according to GroupM's estimates.
"China remains an under-appreciated source of international advertising growth," GroupM Business Intelligence Global President Brian Wieser notes in a new edition of his "Global Marketing Monitor" newsletter published over the weekend.
"A third important source of growth in markets around the world is China," he explains, noting, "We have previously noted that many Chinese manufacturers capitalize on low international parcel delivery costs, which have paired with the availability of self-service advertising tools on global advertising platforms and intermediaries who facilitate all of the above."
Wieser says Chinese marketers are likely spending "many billions more" on Google and Amazon, but those companies do not disclose data in the same way Facebook has, which has enabled GroupM to analyze it.