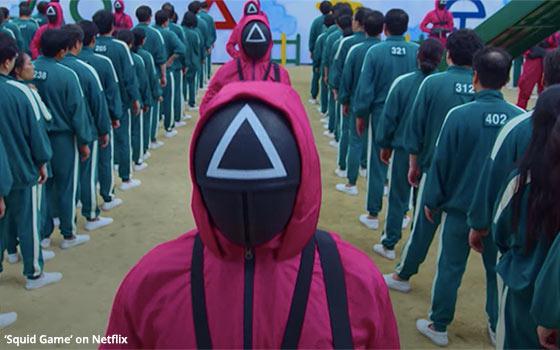 Backing Netflix executives' projections that “Squid Game” would be its biggest global TV series ever, TV analytics company TVision says the South Korean dystopian drama pulled in a massive 11% of all streaming time spent by U.S. viewers for the most recent weekend.

“Squid Game” is a fictional series about a secret organization that lures contestants looking to escape hard-pressed financial situations by playing young children games for a chance to win almost $40 million. Losers can suffer horrific consequences.

Far behind in second place -- for the period of September 30 through October 3 -- were reruns of the HBO series “The Sopranos,” which ran on Amazon Prime Video and HBO Max -- getting a 2.1% share of streaming time spent. This past weekend, a “Sopranos” prequel film “The Many Saints of Newark” debuted in theaters and on HBO Max.

The numbers for “Squid Game” were the highest on Friday and Saturday (October 1 and 2), which took in 40% of streaming view time.

TVision gathers data from a panel of 5,000 U.S. homes, and 13,000 people, demographically representative.

It uses automatic content recognition (ACR) technology and “computer vision” technology to track second-by-second how viewers watch TV, with their eyes on the TV screen.