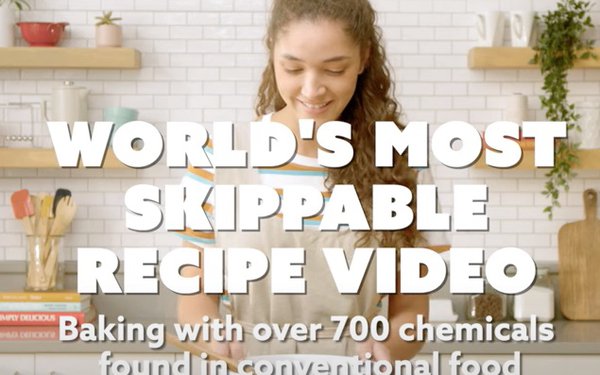 If video ads beyond 10 minutes in duration are typically considered to be “long form,” how do you describe one that rambles on for more than six hours?

Organic-foods advocacy group Organic Voices calls it one of “The World’s Most Skippable Ads."

It’s one of three new campaign videos in which actors recite and depict more than 700 chemicals that are prohibited as ingredients in organic food, farming and textiles.

Clocking in at 6:47:43, this mammoth effort from the Humanaut agency is titled “The World’s Most Skippable Cake Decorating Video.”

It shows a cake artist painstakingly hand-decorating 31 separate sheet cakes emblazoned with the names of the more than 700 chemicals—among them fluralaner, glycine and haloxon. Wording at the bottom of the screen encourages viewers to “skip the chemicals and just go with organic.”

In “The World’s Most Skippable ASMR Video”—a reference to the autonomous sensory meridian response, said to be calming and sleep-inducing—an ASMR artist reads the chemical names in a soothing voice for 65 minutes.

Last and least lengthy, a young woman explains how to bake “my favorite non-organic cookies” with over 700 chemicals found in conventional food processing and manufacturing. It takes her 45 minutes.

“We created these ridiculously long videos assuming no one would ever really watch them—but they’d get the point,” Humanaut founder and chief creative director David Littlejohn said in a statement.

Running on Facebook, Instagram, Twitter and YouTube, the latest campaign is an extension of Organic Voices’ 2019 “Skip The Chemicals” initiative. A 30-minute ad for that campaign generated 16.5 million views, according to an Organic Voices rep.