What The Chuck? Surprising Syfy Series Is A Cut Above 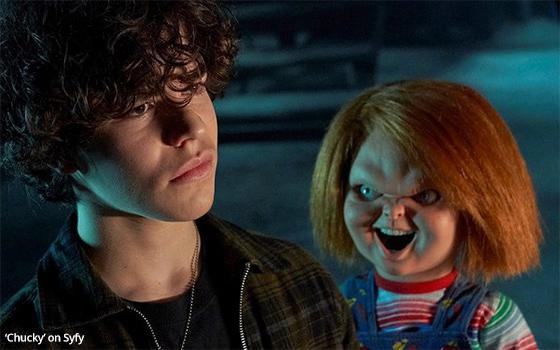 Like the beloved movie series from which it has been adapted, Syfy’s new “Chucky” TV series is not child’s play.

By then, the killer-doll Chucky character had accrued enough fame to earn his way into the title of four more sequels -- “Bride of Chucky,” “Seed of Chucky,” “Curse of Chucky” and “Cult of Chucky.”

In the vast community of Chucky fans, the debate continues to rage over which “Child’s Play” / Chucky movie is the best. It is a continuous argument that is somewhat akin to the same debates one hears about the James Bond movies.

Now, “Child’s Play” fans have a new entry in the “Chucky” pantheon, this new Syfy series premiering this week whose one-word title, “Chucky,” says it all.

Like all the others, this “Chucky” chapter has the cherubic, red-haired doll wreaking his trademark mayhem in, of all places, Hackensack, New Jersey.

Skeptics might be quick to point out that Chucky’s sudden appearance as a still-living doll is not possible, given the number of times he seemed to meet his demise in the past movies.

But that, of course, is part of the Chucky charm. Evidently, he cannot die. And when he suddenly shows up at a yard sale in this new “Chucky” series, woe is the household of the lonely teen who buys him for $10.

What can one say about the new “Chucky” TV show that has not already been said about Chucky in general? Basically, he is this evil doll who scurries about leaving a trail of bloody victims.

He is a master of escape who cannot be held in any locked closet or cabinet -- a cross between Harry Houdini and Hannibal Lecter. Besides, no one suspects this doll of committing these crimes anyway, so the last place Chucky will ever visit is the inside of a jail cell.

In the new “Chucky,” the teen boy who buys him is a loner who is bullied by his middle-school class mates and his own father.

However, despite his unhappiness over the treatment he receives at home and at school, he is not in favor of his tormentors paying for their bullying with their lives. But predictably, Chucky has other plans.

The premiere episode of “Chucky,” which I previewed last week, was suspenseful and bloody. In short, it is a made-for-TV horror classic. Happy October, and happy Halloween.