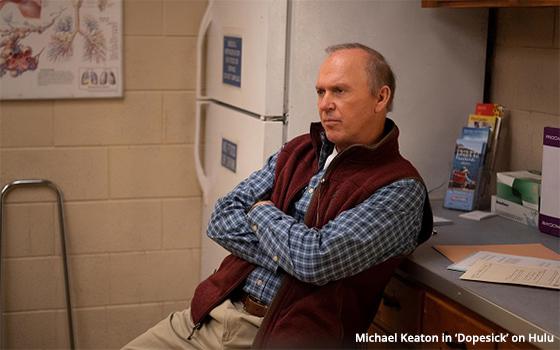 Like other, similar such miniseries and movies that come out of Hollywood on hot-button issues, Hulu’s new dramatization of the history of the epidemic of addictions to oxycontin and other pain-relieving opioids drips with self-importance.

It is also patronizing to the pious, hard-working, coal-mining “li’l folks” whose Appalachian communities were (and perhaps still are) hard-hit by the addiction epidemic.

This is just a matter of opinion (mine), but the self-importance of this limited series -- titled “Dopesick” and premiering Wednesday on Hulu -- is more implied than blatantly expressed.

These kinds of productions always seem to say: This story was never really told in full until we, the Hollywood community of writers, producers, directors and stars, came along to tell it.

As for the “patronizing” remark above, Hollywood depictions of communities such as the one seen in “Dopesick” always come across as clichés based less on real life than on previous movie and TV depictions of these communities.

Having said all that, “Dopesick” nevertheless manages to transcend these negatives. It is a high-quality series, and Hulu seems to be very proud of it, judging from the pre-streaming exposure and publicity it has received.

Among its various qualities is the way it tells a complicated story. It is the story of the company whose aggressive marketing of oxycontin spearheaded the explosion in use of prescription opioid painkillers.

A tsunami of addictions followed, along with the social and criminal costs that went with it. “Dopesick” is about how a small group of local officials brought down the company behind the crisis, Purdue Pharma.

The series boasts a recognizable, A-list cast, including Michael Keaton as a local coal-town doctor, Peter Sarsgaard as one of the U.S. attorneys who defies long odds and tackles the case, and Michael Stuhlbarg as the doctor/scientist who is credited with developing oxycontin and then taking up the relentless sales effort that got so many people addicted to it.

“Dopesick” is directed by Barry Levinson and written by Danny Strong. It might not be the definitive telling of the Purdue Pharma oxycontin story (I will leave that determination to others who might know this story far better than I), but it does a fine job of pulling together a complex story with many moving parts.