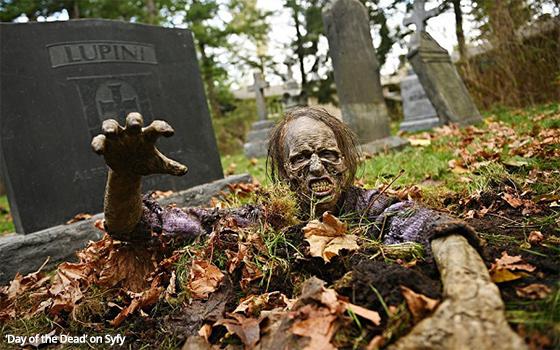 A long time ago in a small city 600 miles away, I came face to face with zombies marauding in a shopping mall.

This was in winter 1980 in a cold place where there was little to do on a typical evening.

Of the few activities that were available, one of them was the weekend, midnight showings in a mall movie theater of “Dawn of the Dead,” director George Romero’s second seminal zombie movie. A friend and I went twice in the 10 weeks we spent in this particular city.

Memories of this movie-going experience were revived yesterday when I previewed Syfy’s upcoming horror series “Day of the Dead,” itself an adaptation of a Romero zombie classic of the same title.

On its press site (and probably elsewhere), Syfy gives the late horror master credit for inspiring this new series, which Syfy describes as “an ode to George A. Romero’s famous flesh-eaters.”

Indeed, Romero (1940-2017) is universally acknowledged as the zombie godfather whose work starting in 1968 was the progenitor of today’s zombie culture and the zombie movies and TV shows that came in his wake that are now too numerous to count.

The original “Day of the Dead,” released in 1985, was the third part of his trilogy of chronological zombie movies, starting with “Night of the Living Dead” in 1968 and then “Dawn of the Dead” in 1978.

“Dawn of the Dead” was what you might describe as the first “epic” zombie movie. Unlike the low-budget, black-and-white “Night of the Living Dead” that took place almost entirely in a house and a neighboring graveyard, the somewhat grander “Dawn of the Dead” was in full color and the zombies were much more numerous.

More intriguing was the movie’s setting inside a real shopping mall (the Monroeville Mall just east of Pittsburgh). Thus, the story had a group of survivors living off of the bounty of this abandoned shopping center -- until the zombies finally penetrated the mall’s locked doors.

The resulting scenes of crowds of mindless zombies walking crookedly down the long concourses of this mall have often been remarked upon by observers who have rightfully identified these images as a commentary on the mindlessness of consumer culture.

For me, seeing “Dawn of the Dead” 41 years ago was a formative experience. The movie is a straight-up horror classic to which few other horror movies either before or since can measure up.

In addition, rolling out of this theater at 2 a.m. directly into the deserted expanse of a shopping mall whose stores were all closed was itself an otherworldly benefit of having just seen this mall-based horror movie in a real mall.

All of this background is provided to make a point -- that I and possibly others like me who have been exposed to zombie horror movies far longer than many others maintain some pretty high standards when it comes to this subject.

As a result, the zombie movies and TV shows that came after Romero have some pretty stiff competition. Some stand up to it, and others do not.

After watching Episode One of “Day of the Dead,” I have to say that this is a high-quality entry in the zombie pantheon.

The life of the small town in which the undead first make their presences known is accurately rendered.

So is the sense of dread a viewer feels as the makers of this series (among them executive producer Drew Brown) slowly reveal the rumblings of an undead invasion while the townspeople go about their business with no awareness of what is about to happen.

Watching “Day of the Dead” is a creepy, unsettling experience. And since that is the whole point of a zombie TV series, thumbs up for this one.