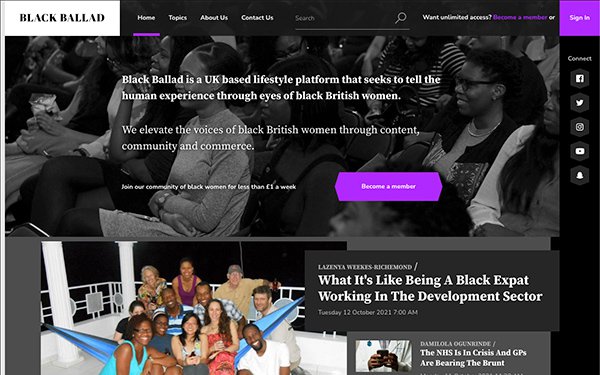 Black Ballad is a digital lifestyle platform that covers the human experience, as seen through the eyes of Black British women. It was launched as a free-to-access website in 2014 after founder-CEO Tobi Oredein’s contract at a weekly TV magazine came to an end, and she struggled to break into women’s lifestyle and entertainment journalism, the London-based Press Gazette reported.

About $173,000 came from venture capitalists and private investors, while the rest came from a Seedr equity crowdfunding campaign. Oredein told the Press Gazette the fundraising showed how Black Ballad “is unrivaled in our relationship with this audience. I don’t know any other company that has Black women as invested in its success in the ways we do.”

“We found a few angels and VCs who saw the potential in Black Ballad and what Black Ballad can be,” she continued. “And I was just kind of like: I think this community can do it — how amazing would it be for Black women to be our investors, as well as our members and readers?’ It tightens that relationship.”

With the TV magazine, Oredein said she started to realize the women being hired “all looked the same — they were white, thin, quite glamorous,” and she did not feel she matched the profile. “You know what, I’ll just give myself a job,” she said. Oredein also felt there was a gap in the U.K. market for Black women she could address.