New For Fall: Fame Is Fleeting In ABC's Intriguing 'Queens' 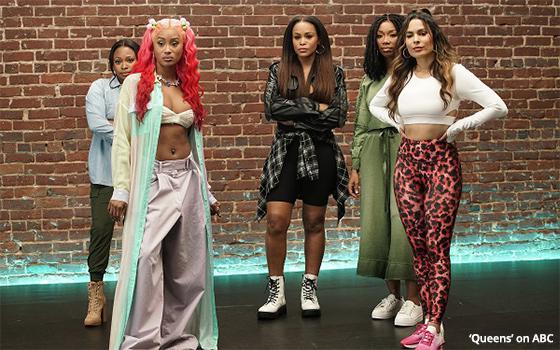 Aspects of the new ABC series “Queens,” about a foursome of 40-ish women who were once the queens of the rap world in the 1990s, come across as contradictory.

But first of all, before going into all that, let me please say up front here that there is much to recommend about this new fall series that launches Tuesday night at 10 Eastern.

The show begins with a flashback to 1999, when the group -- tastelessly named the Nasty Bitches -- was flying high with its then-No. 1 hit, “Nasty Girls.”

The show sets the scene cleverly with a fictional debut on MTV in 1999 of the Bitches’ “Nasty Girls” video -- symbolizing one of the differences between that era and the present one in which an MTV video premiere is considered an anachronism belonging to a bygone age.

But fame proves fleeting as the show quickly snaps back to 20 years later, when the four women are seen in much more ordinary circumstances.

Brianna is a stay-at-home mom with a husband and five kids, Jill is a born-again Christian who seems to be in a stable marriage, Naomi is a struggling folk singer and estranged mom to a teenage daughter, and Valeria ended up on a cable news channel as a talk show host.

The series premiere presents a series of circumstances that will bring the four back together for a reunion that might lead to a career comeback.

By coincidence, it just so happens that all of the four Nasty Bitches are at various crossroads in their lives, and each one can benefit from a reunion for different reasons.

And that’s the show. If there is any central theme to it, then it is this question: Can four women who have obviously moved on with their lives revive their past glory even if that period of past glory was not all glory in the first place?

In this question lies the contradictions inherent in this scenario. For example, we learn that the environment in which the Nasty Bitches once thrived, Christian Jill was once a suffering cocaine addict.

And Naomi was so sexually promiscuous that she is not 100% certain who the father of her teenage daughter is. And in any case, Naomi has almost no relationship with her daughter anyway.

Indeed, all of them seemed to have enjoyed the hedonistic high life presented by their status as international music stars a bit too much.

Here in the present day, their lives have challenges just like everybody else’s. But in many ways, they are better off now than they were 20 years ago.

Oh, well. If the four Nasty Bitches did not agree to get back together, then you would have no show. And despite any misgivings expressed here, many of the scenes in Episode One of “Queens” were genuinely heartfelt and touching.

For the TV Blog, the four women in the present are far more fascinating than their former selves as anything-goes hip-hop stars.

This show seems to be saying, fame is not all that it is cracked up to be, and an ordinary life out of the spotlight can be a blessing.

music, television
1 comment about "New For Fall: Fame Is Fleeting In ABC's Intriguing 'Queens'".
Check to receive email when comments are posted.
Next story loading