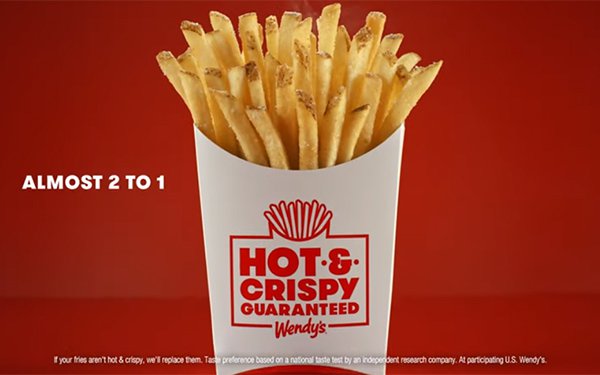 This year may be shaping up to feature a major battle over a side dish. Rather than burgers, McDonald’s and Wendy’s have recently been running ads about their fries.

First, McDonald’s ran ads stating that their fries are so delicious that they cause friends to lie about their ability to resist them.

An ad in July instructed viewers to order fries for their friends even if they say they don’t want them. “Or else, your fries will become their fries,” the announcer says.

In response, Wendy’s is now touting its fries as hot and crispy, rather than cold and soggy. The ad, via VMLY&R, claims that consumers prefer Wendy’s fries by an almost-two-to-one margin.

The fight over fries has been going on a long time. In a 2011 column, the Phoenix New Times gave McDonald’s the nod, stating, “Unfortunately, I've had my fair share of Wendy's fries that were too dry, charred at the tips, or limping helplessly over the carton.”

Meanwhile a 2015 Business Insider column found that “Wendy's fries are actually rather bland and boring. These fries are very thin and absorb too much of the oil, making them soggy. A little salt wouldn't hurt.”

Reviews of the new Wendy’s fries found them disappointing.  The Takeout notes that, “Unfortunately, just because a fry is crisp doesn’t mean it’s good. A crisp cold fry is almost as disappointing as a completely cold soggy one, and mine were cold.”  Uproxx stated that “These aren’t McDonald’s good but I struggle to think of a second fast food French fry that is better.”

Users on Reddit also gave the new Wendy’s fries weak reviews, with one stating, “I found them slightly more fresh lately, which I guess is all I would ask for.”