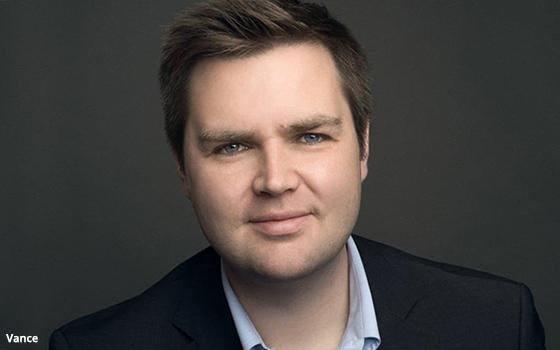 “Hillbilly Elegy” author J.D. Vance is weighing in against Google in lawsuit seeking to have the company declared a "common carrier."

Counsel for Vance and the others add that Google meets the state's definition of common carrier, arguing its services “are made available to all, generally and indiscriminately,” and that it plays an “essential role in our economy, political, and social life.”

The new filing comes in a lawsuit brought against Google in July by state Attorney General David Yost.

He alleged that Google dominates the online search market, and should therefore be considered a common carrier under Ohio law. Yost also alleged that Google violated its common-carrier obligations by giving preferential treatment to its own products.

“Google often presents Google products in enhanced ways in the search results that are designed to capture more clicks, including by integrating other Google business lines -- such as specialized searches -- into the results page,” he alleged. “It does not allow competitors to have similar access, thereby violating its duties as a common carrier.”

Google has asked Schuck to dismiss the case, arguing that Yost's allegations -- even if proven true -- wouldn't show that the company meets Ohio's definition of common carrier.

“Ohio's request has no more validity under the law than a request to declare Fox News, the New York Times, or Walmart a 'public utility' because most people in a particular town prefer to get their news or groceries from them instead of someone else,” the company wrote in a motion filed earlier this year.

The company also says attempts to regulate search results would violate the First Amendment, which prohibits the government from interfering in private companies' editorial decisions.

Vance, a Republican candidate for U.S. Senate, and the others counter in their friend-of-the-court brief that Google “fits squarely within Ohio precedent recognizing telegraphs, telephones, and paging systems as common carriers.”

They add that Google “is in the business of carrying and transmitting messages,” arguing that the company's content delivery networks carry users' messages “every second of every day.”

Many large web companies use content delivery networks to speed delivery of streaming video and other high-bandwidth content.

Vance and the others also urge Schuck to discount Google's argument that it has a First Amendment right to decide how to display results, writing that common carriers “have few if any First Amendment protection from mandated access.”

Elizabeth Banker, vice president of legal advocacy for the tech industry funded Chamber of Progress, says the friend-of-the-court brief “ignores recent case law” on that point. She notes that the Supreme Court ruled in 2019 that the private company Manhattan Neighborhood Network, which operates a cable channel in New York, isn't bound by the First Amendment's prohibition on censorship.

“It might make good politics for J.D. Vance to go after Google in this case, but it’s a half-baked legal strategy,” she said Monday.