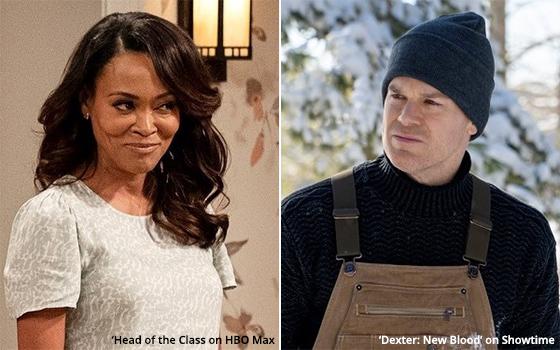 TV appears to be in another one of its occasional mini-booms in the remaking and rebooting of series from the recent and distant past.

Just in this week alone, columns have appeared here about two of them. One was the new “4400” that premiered Monday on The CW.

Another remake was “The Waltons,” which will return in the form of a TV-movie remake next month on The CW. The TV movie that is being remade, “The Homecoming: A Christmas Story,” aired 50 years ago.

And now, two more have come to the attention of the TV Blog, one a sequel series to another show that first aired not that long ago and the other a remake of a sitcom from the 1980s.

The latter series is a new “Head of the Class” coming next week to HBO Max. The original show of the same name aired from 1986 to 1991 on ABC.

It was a high school comedy in which Howard Hesseman starred as a history teacher. Robin Givens played one of the teenage students. In the photo above, her adult character appears in the new “Head of the Class” on HBO Max.

The new one appears to also be a high school comedy with, obviously, a whole new cast of juveniles, school teachers and administrators. It starts streaming on HBO Max on Thursday, November 4.

The other show is a reboot and sequel to the original “Dexter,” the drama series about a serial killer who killed only other serial killers.

“Dexter” ran on Showtime from 2006 to 2013. It was one of a relatively small group of high-quality dramas for which some hailed the decade as a new Golden Age of television.

The titular character of “Dexter,” who was played so memorably by Michael C. Hall, was a troubling figure.

He was a killer with a psychosis for ritualistic murder. But he was a a character who viewers were supposed to root for as a knight-hero who was ridding the world of other serial killers.

If memory serves, when the original series concluded, the jig was up and Dexter found that he had to flee his home in Miami.

When the series ended, it was revealed that Dexter had moved to Oregon to begin a new life with a new identity.

The new sequel series, titled “Dexter: New Blood” and scheduled to premiere on Showtime on Sunday, November 7, picks up the Dexter story 10 years after the end of the first series.

In the new one, he has resettled in a small Oregon town under the name Jim Lindsay (a name that may have been chosen as an homage to Jeff Lindsay, the author who created the Dexter character in a series of books).

Michael C. Hall, now 50, is back playing Dexter in the same detached, artful way he took on the role previously. That’s him in the picture above in the new series.

Unlike the other three shows mentioned in this TV Blog that are remakes of past shows, “Dexter: New Blood” is the only sequel series on the list. The show features both returning characters and new ones, owing to Dexter’s relocation to a new state and town.

The central question about the character is this: Has he been busy still practicing his peculiar, secret vocation from his new home in the Pacific Northwest?

An answer to that question is provided in the premiere episode of this new sequel. For 10 years, Dexter (now Jim) has kicked the killing habit and appears to be done with it.

But is he really done for good? The bet here is that he is not because, otherwise, he wouldn’t be Dexter.

television
1 comment about "Reboot Mini-Boom Includes 'Dexter,' 'Head Of The Class'".
Check to receive email when comments are posted.
Next story loading