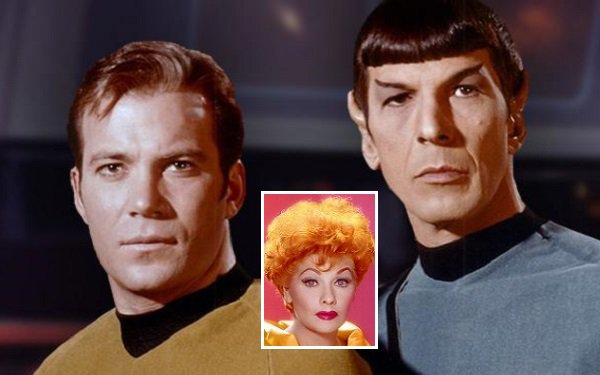 A new 10-part documentary miniseries about the history of “Star Trek” is simultaneously lighthearted (and even silly at times), informative and highly entertaining.

Only Episode One was available for preview for this docuseries, titled “The Center Seat: 55 Years of ‘Star Trek’,” premiering next Friday (November 5) on History Channel.

But this episode packs a ton of early “Star Trek” material into a single hour, which suggests that subsequent episodes -- encompassing the entire history of the “Star Trek” brand up to the present day -- will be just as rich.

Histories and nostalgic, retrospective TV shows about “Star Trek” have been relatively numerous over the years, and I have watched my share of them.

Still, for whatever reason, I learned some things while watching this one that I did not know before.

For openers, I previously knew almost nothing about the life story of “Star Trek” creator Gene Roddenberry.

But according to this show, it turns out that this was a man who had already had a varied and adventurous life before he spearheaded the creation and development of “Star Trek” starting in 1964 -- decorated World War II bomber pilot (surviving 89 missions), commercial pilot for Pan Am and a survivor of a plane crash in Syria that killed 15 others and for a time, a police officer in the Los Angeles Police Department.

He had an ambition to write TV scripts and eventually succeeded as a writer of westerns. Based on this background, in his original pitches for “Star Trek” he described it as “ ‘Wagon Train’ in space.”

Even more intriguing, at least to me, were some smaller details. One was the reaction of NBC execs when Roddenberry first told them about the character of Mr. Spock, who would not be a native of Earth but a “Vulcan” from another world with a distinct set of physical characteristics.

NBC’s reaction was to turn thumbs down -- because, says one of the historian-experts interviewed on the show, “They didn’t like the pointy-eared guy.” Producers went ahead with the character anyway and Mr. Spock became one of the best-known characters in the history of television.

This yarn is a classic similar to other such misjudgments on the part of network executives throughout TV history, such as the reaction of CBS execs to Charles Schulz’s first Charlie Brown Christmas special: They hated it.

Another example is the story of how a group of network execs reacted to a David Chase pitch of “The Sopranos” before it found a home on HBO: They apparently had no problem with the criminal behavior such as stealing and murdering, but, they asked, did Tony have to be in therapy?

That, of course, was the central theme of “The Sopranos,” and in the case of “Star Trek,” who among us today can imagine this franchise without Mr. Spock and his pointed ears?

According to this History Channel documentary, Roddenberry felt strongly about casting Leonard Nimoy in the Spock role because he had worked with Nimoy on a drama pilot called “The Lieutenant” which was not picked up.

Also seen on that show -- Nichelle Nichols, who Roddenberry cast in an officer’s role on “Star Trek,” communications officer Nyota Uhura, which was racially ground-breaking at the time.

Roddenberry also envisioned actor DeForest Kelley in the role of the Enterprise ship doctor, Leonard “Bones” McCoy. But at the time, Kelley was known primarily for playing a series of heavies on television westerns.

So, to clean up his image and turn him into Dr. McCoy, Roddenberry ordered Kelley to adopt a new hairstyle. And the style he adopted was the style that had been made popular by President John F. Kennedy (although the president was assassinated the previous year).

As this documentary shows, with photos of both JFK and Bones, their hairstyles were indeed identical.

Best of all in Episode One of “The Center Seat” is the story of how Lucille Ball (above photo, inset), then running the studio that she and her ex-husband Desi Arnaz established in the 1950s when they were still married, believed so strongly in “Star Trek” that she gambled the company’s future on it.

This story has been told before in documentaries and books, but it never ceases to amaze: The question of whether “Star Trek” would die in development or go forward into TV history depended on a yes or a no from TV’s reigning queen of comedy, Lucille Ball. Lucy said yes, and the rest, as they say, is history.