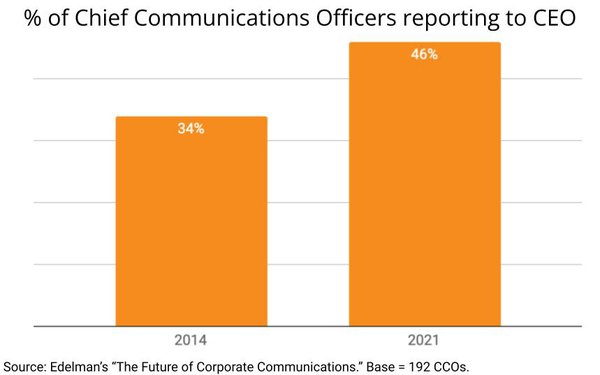 A confluence of crisis-related factors ranging from the COVID-19 pandemic to the role of corporations amid rampant social change have elevated the role, investment resources and strategic role of corporate communications professionals, according to findings of a just-released new study of Chief Communications Officers (CCO) of U.S. corporations fielded by public relations giant Edelman. The study, "The Future of Corporate Communciations," also indicates corporate public relations organizations increasingly are adopting technologies and data utilized by the rest of marketing, advertising and media, and occasionally are moving into their functional turf, too.

The study finds that over the past seven years, the percentage of CCOs report directly to their corporation's CEO, has grown to 46% from 34%.

"I do think the trend is going to continue," Jim O'Leary, U.S. COO and Corporate Affairs Practice Chair of Edelman said during an interview with MediaPost, citing fundamental changes in the role of corporate communications that have been accelerated by the multiple crises of the past few years, something that has been attributed to the acceleration of business transformation in other functional areas of marketing, advertising and media too.

"Pre-COVID, I probably would not tell you that this trend was going to continue," O'Leary said, adding "But now the things that CCO is responsible for is growing in importance -- everything from the safety and well-being of the corporation's employees, to its customers to the war for talent to the role of business in society is accelerating."

In fact, CCOs surveyed by Edelman report that the increasing role of corporations in social issues now ranks as the second biggest force influencing change in their roles and organizations, just behind the overall push for business transformation.

The increasing strategic role has accelerated the role of corporate communications in managing data, as well as other functional marketing areas such as media-buying, campaign management, and CRM.

Nor surprisingly, those are some of the biggest projected increases in so-called "ComsTech" -- corporate communications version of ad tech -- budgets (see chart at bottom). 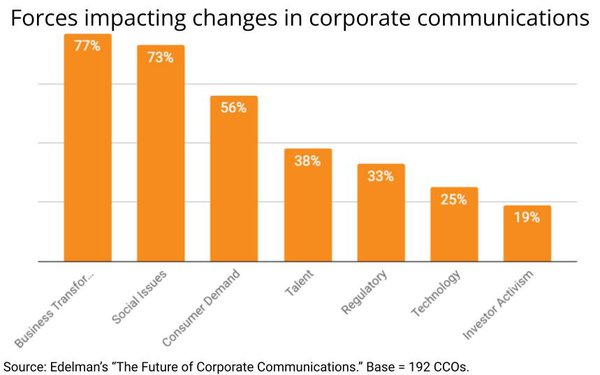 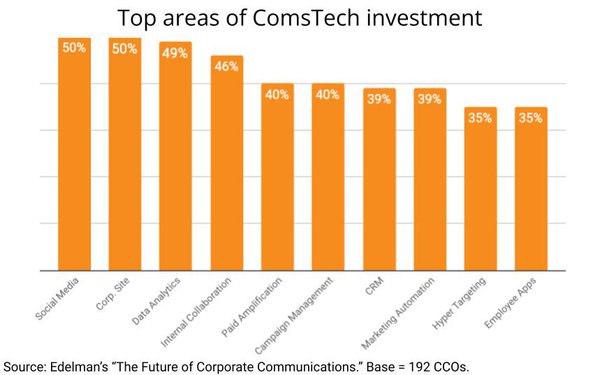