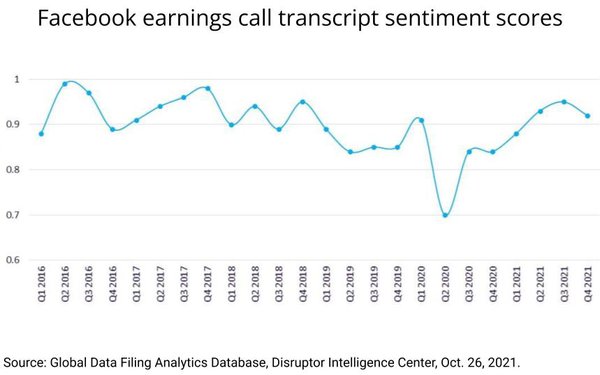 A sentiment analysis of Facebook's earnings call transcripts shows that for its most recent one, Tuesday's third quarter release, the social network's sentiment fell more than 3% from the prior quarter, according to analysts at data and analytics firm Global Data.

The findings mirror a MediaPost keyword analysis of Facebook's earnings calls, which show negative factors such as "headwinds" are dominating the minds of management and investors.

This comes despite a heavy emphasis on an ambitious future reboot of the company as a so-called "metaverse" platform, as well as a likely rebranding initiative.

“Facebook’s sentiments were not impacted as much by whistle-blower issues in the third quarter of 2021," says Global Data Business Fundamentals Analyst Rinaldo Pereira, noting, "In the past, the company witnessed dips in sentiment due to data issues, scandals, or antitrust investigations. Such issues were raised in its recent earnings call in Q4 2021 and impacted sentiments. Facebook’s moves to improve the brand image and the metaverse launch are steps in the right direction. Sentiments have rebounded and started showcasing improvement in 2021 driven by positivity around advertiser spends due to the ecommerce boom and the metaverse.”