It's Official - The Metaverse Is Madison Avenue's Next New Thing 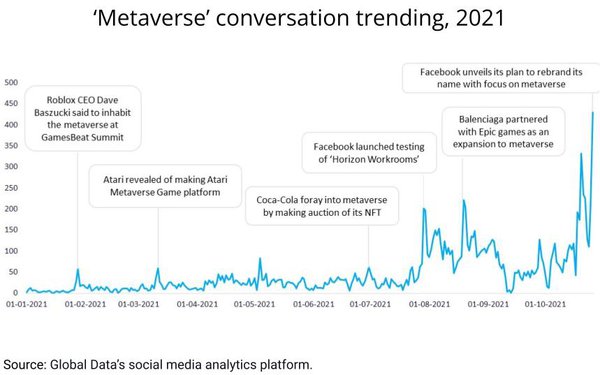 Move over NFTs. The blockchain, fuggedaboutit! And who even remembers the "Internet of Things" as a thing? In the half-life of bright shiny things galvanizing the media industry's attention, the metaverse has jumped a virtual shark.

According to an analysis by social media analytics platform Global Data, conversations about the metaverse have been trending long before Mark Zuckerberg began hinting at Facebook's rebrand, though it clearly began spiking when he did so.

Interestingly, it's not just tech titans or sci-fi geeks talking about it, but some of the world's biggest brands.

"Beyond tech companies, the race is heating up among global brands from other industries such as fashion, FMCG and automotive to adopt metaverse, as industry leaders see the virtual realm as a key to the Internet’s next phase," Global Data's analysts write in the analysis released this morning, which notes that there has been a sharp upward trend since the beginning of the third quarter.

The analysis shows the peak surge of "metaverse" conversations was observed in the third week of October, when Facebook first publicly announced it would rebrand itself around the metaverse, and of course it announced its new "Meta" name change Oct. 28, but also disclosed a test of a new virtual reality remote work app dubbed "Horizon Workrooms" (utilizing its Oculus Quest 2 headsets) built around a futuristic metaverse orientation in August.

“Influencers’ sentiments were largely positive on Facebook’s announcement to rebrand itself with focus on metaverse as the new name ‘Meta’ is reflecting the company’s commitment in future, highlighting a shift to an emerging computing platform focused on virtual reality," Global Data analyst Smitarani Tripathy said in a statement released with the report. "Influencers on Twitter also consider this as a smart move, in line with the company’s ambition to be known far more than just social media.”

Among the big brands that have explicitly begun leaning into the metaverse, are AB InBev and Coca-Cola Co. (vis a vis a branded NFT [non-fungible token] campaigns, Hyundai Motor Co. (which launched an open beta of its "Hyundai Mobility Adventure" via online gaming platform Roblox in September), and high-end fashion marketers Balenciaga (which partnered with Epic Games in September to launch virtual outfits on Fortnite game platform) and Dolce & Gabbana (which launched its own NFT collection on the rise of metaverse in October).

digital, future of media, internet of things
Next story loading