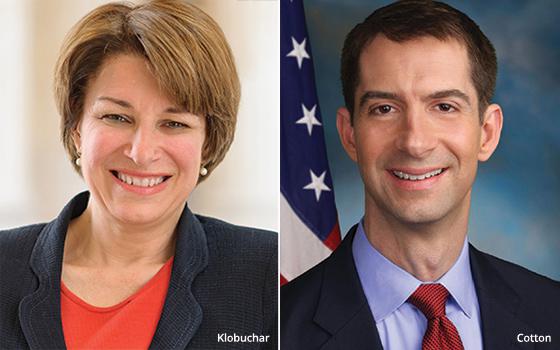 The “Platform Competition and Opportunity Act,” proposed by Senators Amy Klobuchar (D-Minnesota) and Tom Cotton (R-Arkansas), would prevent large platforms from acquiring other businesses, unless the platforms proved that the proposed acquisition would not remove a competitor or potential competitor from the market.

Currently, regulators who want to block a merger must first prove that the deal would harm competition.

A similar bill was introduced in the House in June.

The proposed bill is one of several potential new antitrust bills targeting the biggest technology companies.

As with several other antitrust bills, the Klobuchar-Cotton measure addresses an issue flagged last year in a 450-page report by Democrats on the House Judiciary's antitrust subcommittee. That report alleged that Apple, Amazon, Google and Facebook maintained their market dominance by copying or purchasing competitive rivals, and engaged in “self-preferencing, predatory pricing, or exclusionary conduct.”

Among other accusations, the report authors said Facebook “used its data advantage to create superior market intelligence to identify nascent competitive threats and then acquire, copy, or kill these firms.”

The Federal Trade Commission is currently suing Facebook over its purchases of Instagram acquired for $1 billion in 2012) and messaging service WhatsApp (bought for $19 billion in 2014).

The FTC argues that Facebook purchased both companies in order to fend off potential competition.

The agency reviewed both deals when they were announced, and allowed them to close.

The Klobuchar-Cotton bill's anti-merger provisions would apply to online platforms with at least 50 million U.S. monthly active users or 100,000 U.S. based monthly active business users, and at least $600 billion in revenue or market capitalization.

“Big Tech monopolies have shamelessly gobbled up hundreds of potential competitors over the last decade,” Alex Harman, competition policy advocate for Public Citizen, stated Friday. “The answer is to make clear that predatory behavior -- like Facebook’s acquisitions of Instagram and WhatsApp -- will no longer be tolerated.”

Charlotte Slaiman, competition policy director at Public Knowledge, added that the bill combats “one of the major strategies Big Tech uses to entrench its dominance: mergers and acquisitions.”