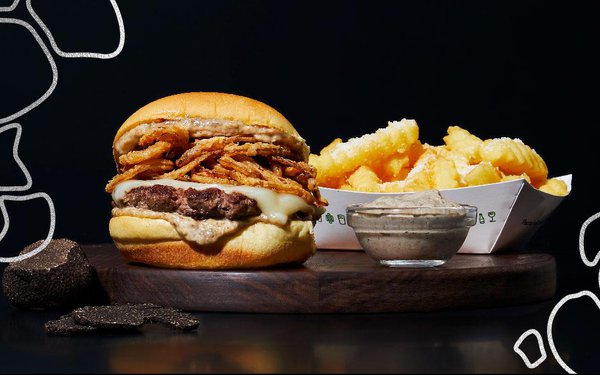 For the third quarter, the New York-based chain says that total revenue grew 48.7%, reaching $193.9 million -- and while it was a record, it still came in shy of its forecast. And same-store sales rose 24.8% compared to the comparable period in the prior year. Its net loss for the quarter was $2.4 million, compared to $6.1 million in the comparable period last year. Those results also fell short of expectations.

In a conference call webcast for investors, company executives said  Shake Shack continues to see recovery in its urban stores as more people return to work and tourism increases. Digital sales account for 42% of revenues, and the company has hung on to 80% of its digital sales, even as customers physically returned to its restaurants.

Like other chains, Shake Shack is wrestling with the rising cost of ingredients and labor challenges, investing heavily in higher wages and advancement opportunities. As a result, it's testing higher prices in some locations and even running a small-scale pilot for accepting tips.

Commenting on the volatility of commodity prices, including a 30% jump in the cost of  beef, the company says it is experimenting with raising prices while keeping those hikes lower than competitors.

It's also introducing more premium items: a Black Truffle Burger and Parmesan Black Truffle Fries, both limited-time offers, as an app-only option to drive digital engagement. Made with real black truffle oil, crispy shallots and Gruyere cheese, the $8.99 burger "pushed the upper envelope of pricing tiers for us," says CEO Randy Garutti. "And it's going to teach us a lot about our opportunities."

Shake Shack's ongoing digital investments include a new website, more app-exclusive menu items and kiosk expansions. Garutti says that in stores that have kiosks, "we generate more than 75% of our sales through our kiosk and our digital channels. Kiosk orders have higher checks than those that are taken at the cash register."

After the earnings report, BTIG upgraded the company from neutral to buy, despite Shake Shack's missing its sales and earnings forecasts. "We believe the company's fundamentals have bottomed with upside trajectory ahead," writes Peter Saleh, an analyst who covers Shake Shack for BTIG.

"We see increased tourism/mobility on the horizon as borders reopen for international travel in November, vaccines for children become available and return to work accelerates, all aiding Shack's urban store base," Saleh writes. "Our recovery outlook prompts our share upgrade."