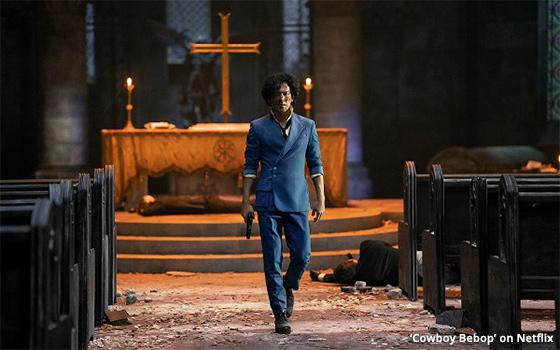 Style outpaces substance in the new action series “Cowboy Bebop” premiering Friday on Netflix, but we wouldn’t have it any other way.

Simply put, this outer-space shoot-’em-up is the very definition of cool, starting with its retro opening-title sequence which might be the most stylish one of these since “Mad Men.”

“Cowboy Bebop” concerns itself with the adventures of three outer-space bounty hunters -- two men who work as partners and a woman who works alone and is a thorn in their sides.

The action, mainly in the form of pitched gun battles with a lot of kung fu thrown in, comes fast and furious right from the very start of the first episode.

Adapted from a Japanese Anime version of the same title, this live-action series has an edgy international feel. It envisions a future in a colonized outer space that is nothing if not diverse.

The various stops the bounty hunters make in their pursuit of wanted galactic fugitives are not unlike the planet earth, which suggests that the colonization of other planets by refugees from our world will turn out pretty much like the world they left -- a place with flaws.

“Cowboy Bebop” is styled like an outer-space Western, right down to a Mexican saloon that could have been lifted wholesale from an old Clint Eastwood movie.

As such, “Cowboy Bebop” encroaches on territory that is already being trodden by “The Mandelorian” on Disney+. But “Cowboy Bebop” conjures up a universe that is distinctly its own.

In the story that takes shape in Episode One, the two male partners -- Spike Spiegel (John Cho, pictured above) and Jett Black (Mustafa Shakir) -- are first seen in a furious battle with a gang of casino thieves.

They then pick up the trail of another fugitive who has crossed an intergalactic syndicate -- another apparent byproduct of the human race’s ill-advised colonization of other worlds.

This effort puts our heroes on a collision course with that very syndicate and its army of black-suited henchmen. And there is another headache -- the fierce female independent bounty hunter (Daniella Pineda) who has a talent for showing up at all the wrong times.

Watching “Cowboy Bebop” in preparation for this TV Blog was a rare pleasure. The show fulfills one of the criteria that a TV columnist, or just anyone, hopes to get from a TV show -- Entertainment (with a capital “E”).

If the TV Blog maintained an entertainment report card, “Cowboy Bebop” would get an A+.