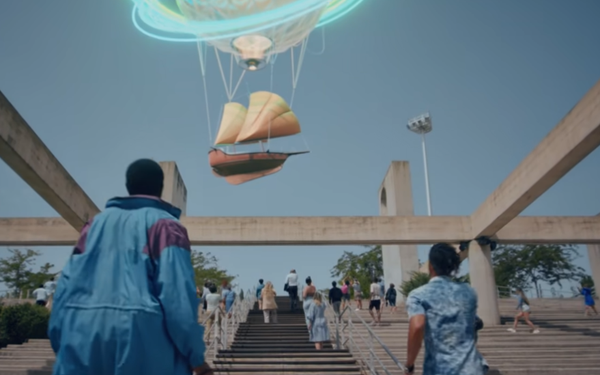 Niantic, a U.S. firm best known for developing augmented reality games Pokemon Go and Ingress, has launched its first-ever branding campaign, which encourages people to get outside, explore and connect with friends.

The two-and-a-half minute film that launches the effort shows gamers leaving their homes to run around and bike. A voiceover says, “Explore. Like never before…with Niantic.”

The ad, via Gravity Road, ends with a crowd gathered as a planet holding an old sailing ship (a reference to Gold Rush-era ship Niantic) emerges from the sky. A caption reads, “Meet you out there,” against the silhouette of earth.

In keeping with Niantic’s mission to encourage people to go outside, the film was originally dropped in Niantic’s game Ingress. Ingress players were able to view the film via media drops obtained from portals. The film contains several Easter Eggs, which will later be used in a scavenger hunt.

The campaign will also include a takeover of Times Square digital screens, which will reveal the ARship, an AR version of Niantic’s airship logo that can be seen via a special app built on Niantic’s Lightship platform.

Gravity Road cofounder Mark Boyd added that, “Niantic’s most distinctive asset, its logo, embodies their spirit of exploration and optimism. We referenced it early on as the ‘magical ice cream truck of joy in the sky.’ With a lot of talk about the metaverse in the last few months, it is exciting to see an ambitious company like Niantic create work that brings the physical, virtual and social worlds together in such a compelling way. As the good ARship Niantic sets sail, we hope this is the start of a very special brand campaign.”