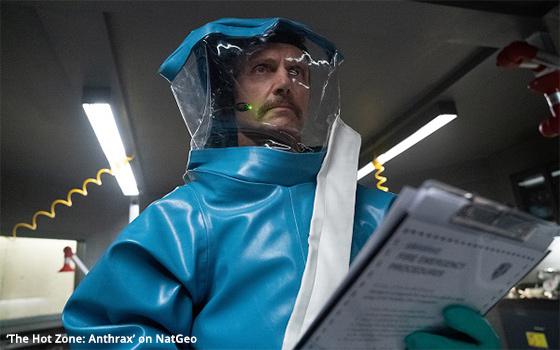 With everything else that was going on in September 2001, it is sometimes easy to forget that just a little over a week after the 9/11 terrorist attacks that month, someone began sending envelopes of powdered anthrax to news media companies.

For those who worked at some of these target companies, these were unsettling times, to say the least.

Memories of those tense, uneasy days are about to be revived with the premiere next Sunday night of “The Hot Zone: Anthrax,” a National Geographic limited series that retells the story from the point of view of those who investigated it -- including FBI agents and infectious disease researchers.

The principal stars of the series are Daniel Dae Kim as one of the lead FBI agents on the case, and Tony Goldwyn as one of the scientists.

This scripted, dramatized version of the story of the anthrax attacks is a very high-quality, made-for-television production. It is suspenseful, and by all appearances, accurate.

The series delves into the anthrax attacks, in which powdered anthrax spores were delivered by mail to NBC News in New York, the Florida headquarters of the supermarket tabloid publisher American Media and the Washington offices of Senators Tom Daschle of South Dakota and Patrick Leahy of Vermont.

Another target of the attacks was The New York Post, although perhaps in the interest of brevity, the story of The Post is not one of the main storylines in this limited series.

I worked at The Post at that time and remember the period well. Our envelope of anthrax was mailed to the editor of the op-ed section.

It was opened by his assistant who suffered an infection from the spores that presented as a sore that broke out on one of her fingers. Although scary at first, her condition was treatable.

I also remember when the men in hazmat suits came soon after to do a cleanup of the editorial department that included hanging clear plastic around that area from the ceiling.

When I walked over there to get a look at them, I noticed how haphazardly this plastic was hung, with huge gaps between the ceiling and the tops of these clear sheets.

I remember thinking that they did not seem to be doing the kind of thorough, professional job you see in movies and TV shows.

However, no one else came down with an anthrax infection, although for a few weeks I took to opening the TV department’s mail in rubber gloves and face mask (like the ones everyone is wearing now) in a back hallway near the freight elevators. I encountered no envelopes with any powder.

This “Hot Zone” series is the second in an ongoing series of “Hot Zone” dramas for NatGeo. The first “Hot Zone,” starring Julianna Margulies, was about an ebola outbreak and became NatGeo’s most-watched scripted drama in its history.

One of the more intriguing aspects of this new anthrax series is the performance of Harry Hamlin as Tom Brokaw.

His portrayal of the then-NBC anchorman is so uncanny -- right down to Brokaw’s distinctive voice -- that I had to double-check that this was actually Harry Hamlin and not Brokaw himself.

This performance alone makes “The Hot Zone: Anthrax” worth watching, but so does just about every other aspect of this four-star miniseries.

“The Hot Zone: Anthrax” premieres at 9 p.m. Eastern on National Geographic and starts streaming on Hulu on Sunday (November 28).