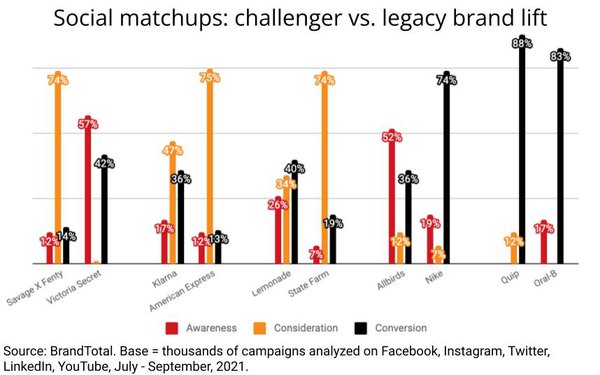 How do established brands compare to up-and-coming brands on major social media platforms?

A new study by social advertising intelligence platform BrandTotal offers insights into the ways that top established or incumbent brands and their competition are allocating marketing investments, who they are targeting, and what their campaign performance looks like.

In the study, BrandTotal analyzed thousands of paid-social campaigns on Facebook, Instagram, YouTube, Twitter, and LinkedIn over a period of 90 days between July and September. The platform focused on five pairs of brands competing in the same industries:

Savage X Fenty focused more on younger audiences, with 59% of its ads targeting 18- to-35 year-olds -- a demographic that only 25% of Victoria’s Secret ads are targeting. The challenger brand also dominates Gen Z (18-24) with 41% focusing ads on that demographic, versus just 12% for the established brand.

In finance, Klarna’s top social ad channel was LinkedIn at 31%, compared to American Express at 1%. AmEx preferred Twitter (48%), while Klarna only placed 25% of its ads on LinkedIn.

Seventy-one percent of Klarna’s ads targeted 18- to-35-year-olds, while half of its ads chased Gen Z specifically. AmEx followed a similar trend, but at 35% was not as focused on Gen Z.

Amex and Klarna both had a consideration-oriented marketing funnel, while Klarna (36%) was more likely than Amex (13%) to push conversion-based ads to its audiences.

Insurance brands Lemonade and State Farm both favored YouTube (84% to 90%) but the former was more reliant on Facebook when placing ads (15% to 4%).

Both brands are also highly focused on targeting younger audiences. Unlike any other established brand in the study, State Farm was aggressively pursuing Gen Z, with two-thirds of its ads aimed at that demographic.

State Farm’s advertising was highly consideration-focused (71%), while Lemonade’s ads were able to successfully hit each phase of the funnel -- awareness, consideration, and conversion.

While footwear brands Allbirds and Nike both focused heavily on 18- to-35-year-olds and Gen Z, they differed when choosing top social channels. Seventy-nine percent of Allbirds ads can be found on YouTube, compared to 24% of Nike’s, whose top channel was Twitter at 65%. No Allbirds ads ran on Twitter.

Similar to State Farm, Oral-B is a good example of an established brand (47%) beating a challenger (36%) for the Gen Z demographic. Both brands focused on conversion.

Overall, BrandTotal’s study showed a couple of key trends. One is that Facebook is not just the channel of choice for established brands/incumbents. For four of the six challengers, Facebook ranked as a top-three social channel.

It was clear that incumbents were most concerned with conversion. Challengers that are still building trust and visibility among consumers are more likely to engage the entire marketing funnel with their ads.