If You're Close-Minded, Don't Open Your Wallet For Mixwell 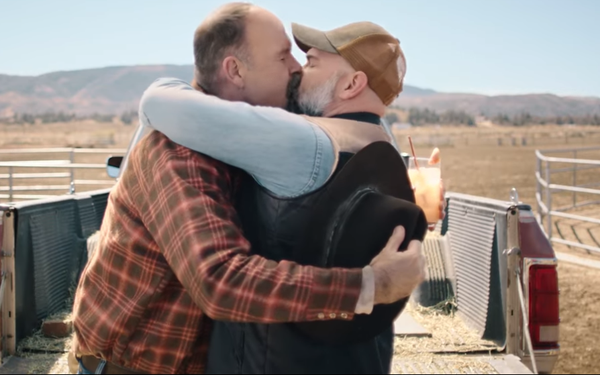 Last month a blog called a recent CarGurus ad “the gayest commercial of 2021.” That honor, though, surely goes to this ad for beverage mixer brand Mixwell.

The ad, via The Many, starts with a burly guy pulling up in a pickup truck. As he begins unloading hay from the back of the truck, he starts on a familiar riff. “Whatever happened to men,” he says against a country Western soundtrack. “Manly men with strong hands and a firm grip. Men who like it when things get hard.”

The man then lays it on the line, “If you think it’s about time to defend our country’s freedoms, I have only one thing to say to you: Me and my husband totally agree.”

What follows is a few seconds of the two open-mouthed kissing. “If real freedom offends you, please don’t buy Mixwell,” the jingle croons. If you still don’t get the point, the ad closes with a shot of the drink on a surface that appears to be rocking back and forth.

The Many says the ad is “strategically timed for the upcoming holiday season.” That’s not only because it’s the best time of year to spark alcohol sales, but because “For years, brands have walked a tightrope to avoid upsetting any specific group of people or negatively trending on Twitter to become the focus of a boycott.

“This campaign reinforces our core belief—that mixing, on every level, really does make the world a better place,” said Jens Stoelken, CEO of Mixwell. “And we want to make it clear to those who are actively perpetuating ideas that create turmoil or exclude and shame others based on their beliefs that this is not the drink mixer for you.”

The effort includes outdoor ads including a billboard that says “If rainbow flags send you into a tizzy, don’t look down at our big gay gorilla,” which features a big pink blow-up gorilla.

“This campaign may ruffle a few feathers, but ultimately, what is it doing? It’s asking you NOT to spend your money on Mixwell. That seems like a win-win for everyone in a weird way,” said Curtis Petraglia, Creative Director of the Many.